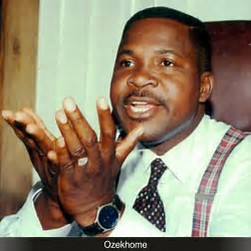 Under the editorial, “Inter-agency rivalry hurting anti-corruption war”, published on Thursday, 10th August, 2017, I was greatly disparaged and libelled by the Punch newspaper as having been prosecuted by the EFCC. My name was unfortunately mentioned along with those of Joe Agi, SAN, Justice Ademola of the Federal High Court, Abuja, and his wife, Olubowale, as examples of “string of losses of cases against high profile suspects”.

These cases were alleged by Punch as having been “all dismissed within a space of days. In most of the cases, the judges cited lack of convincing prosecution”. For the avoidance of doubt, I was never prosecuted, nor am I being prosecuted now, by the EFCC. There has never been, and cannot be, any reason for this, as I have not committed any known offence against the laws of the land. The facts are as follow:

The EFCC had illegally, whimsically and capriciously seized and frozen my professional fees of 75m in Mike Ozekhome’s Chambers account, describing the well earned professional fees as “proceeds of crime”; all because it was paid to me by my client, Governor Ayodele Fayose, from a court-ordered defrozen and unblocked account, an account the EFCC had also earlier illegally frozen. I had given the EFCC one week to unblock my account. When it failed to do so, I sued the EFCC before Justice Abdulazeez Anka of the Federal High Court, Lagos, praying the court to defreeze the account.The Judge in a well considered judgement not only defreezed my account, he actually lampooned the EFCC over its illegal and unconstitutional act of freezing my professional fees account, describing the act as diabolical. You can therefore see that the question of me being prosecuted by the EFCC, as in the cases of the other mentioned people who were actually prosecuted, but discharged and acquitted, or, of any EFCC case pending against me, being dismissed, “for lack of convincing prosecution”, does not arise at all.

I hereby call on the management of Punch group of newspapers to immediately correct this faux pas (I want to believe it was an honest and unintended mistake), that has led to a frenzy of phone calls, messages, print, electronic and social media activities. This is to avoid further aspersions, opprobrium and obloquy being cast against my person and my hard earned reputation.