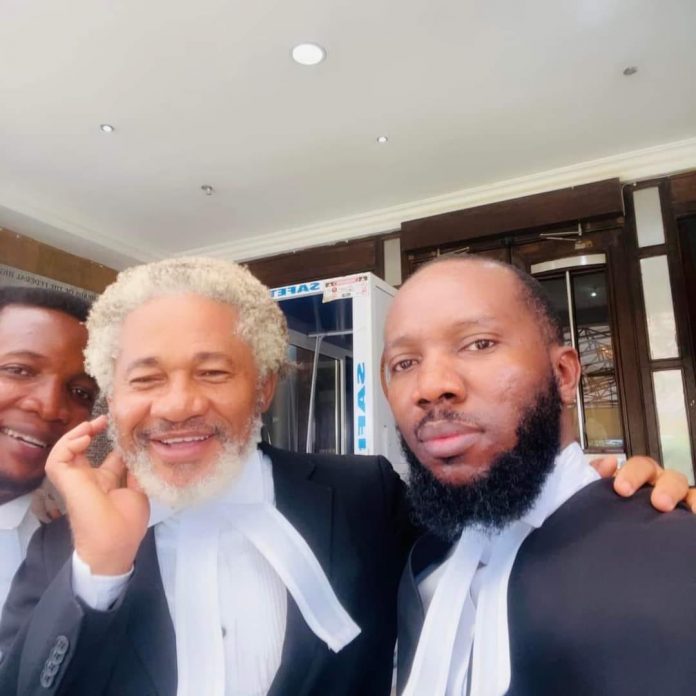 The conviction of Inibehe Effiong on 27/ 7/2022 by Honourable Justice Ekaette Obot, the Chief Judge of Akwa Ibom State came to me as a surprise because both of us were at the Federal High court Abuja the previous day barely twenty four hours before . I did not see it coming and I am sure neither did he .
As a member of the legal profession and as a colleague of Effiong whom I share the common bond of activism and public interest litigation with, I took it upon myself as a duty to work with members of the legal profession and public to see that he regains his freedom .

I kept monitoring news and events about his wellbeing until on 2/8/ 2023 when I decided to go from Lagos State to Akwa Ibom State to see things for myself . When I visited him at the Nigerian correctional service facility in Ikot-Ekpene on 3/8/ 2022, at about 11:30 am he informed me inter alia and I verily believe him as follows:

That he did not conduct himself in anyway or manner that amount to his being contemptuous of the court while conducting his case before Justice Obot, in a defamation matter between the Akwa Ibom State Governor, Udom Emmanuel, who is the claimant, and Leo Ekpenyong, a lawyer, the defendant.

That Justice Obot , on that faithful day sat at about 10 a.m. announcing to all present in court that her Lordship is coming in anger today and will not tolerate any nonsense from anybody.

That her Lordship instructed her police orderly to bring into the court two police officers armed with AK47 rifles which they did .

That even though the business of the court for day was for the cross examination of the claimant’s witness he however customarily as lawyers do and allowed by practise brought to the notice of the court his pending application for justice Obot to recuse herself from the case because he no longer have confidence in the court to be fair and just in adjudicating the matter.

That his notification to the court is without prejudice to fact that he had earlier on administratively via a letter applied to the court for justice Obot to recuse herself from handling the case to no avail .

That justice Obot refused to hear his motion on notice for her to recuse herself . She insisted that it is her court and that she will take the application on another date but that trial must go on .

That while proceedings was on , in range justice Obot ordered Premium Times newspaper. reporter out of the court and.seized his phone .

That the court ignored his concerns on the armed police men which caused him to formerly make an application to that effect insisting that he be recorded.

That the court got infuriated by his application and ordered him to step out from the Bar and derobe himself, which he did .

That the court consequently committed him to prison for contempt for one full calender month.

That his plea was not taken neither was he given the opportunity to address the court on his committal to prison for alleged contempt..

Before my visit to Effiong , I had earlier on met with Barrister Augustine Asuquo at the Uyo High Court premises at about 9: 30 am and his testimony collaborates that of Effiong which I verily believe . He told me that he has being handling the case in issue with Effiong and that Justice Obot have been ultra hostile to counsel to the defendant from the inception of the case . He informed me that he once narrowly escaped being thrown into prison by Justice Obot because he tried to clarify some facts during court proceedings . He also informed me that justice Obot have on two occasions ordered the premium times newspaper reporter out of her court and on the second occasion seized his phone .

More worrying and disturbing is that Augustine informed that he has applied for the certified true copy of the court proceedings of the court for a week now and justices Obot has refused to allow the registry do their job because she has taken the file away and kept it in her custody refusing to make it available to the public and thereby frustrating Effiong’s application for bail and appeal to challenge his conviction .

I have read several write ups on Effiong’s conviction including those of the premium times , Femi Falana SAN , Seprebofa M. Oyeghe Esq, and the NBA position on the matter , which I appreciate and will not want to repeat here for time and space .

Suffice it to say that in all these I have always given justice Obot the benefit of doubt in the interest of fair hearing because I have not been opportune to hear her own side of the story before drawing conclusions but that position has changed now because of her failure , refusal and or neglect to furnish the public with the certified true copy of the court proceeding by hoarding the case file .

Consequent upon the above , I am compelled to believe and I do believe that justice Obot’s deprivation of the public to have assess to the court proceedings and court processes filed therein is a clear indication that she has skeleton in her cupboard which she is hiding that must be exposed in the overall interest of justice. At this point what ever record of court proceedings she makes available now cannot be trusted and presumed to be correct, credible and accurate .

From the available facts weighed against the refusal of justice Obot to make available the court proceedings to the public it is my humble submission that Honourable Justice Obot has conducted herself in such a manner that suggest that she has abused the power and authority of her office as a judicial officer by misconducting her self.

Obviously there is no doubt that justice Obot is in breach of the Code of conduct for judicial officers by failing , refusing and/or neglecting to respect and comply with the laws of the land and have conducted herself in such a manner that depromotes public confidence in the integrity, independence and impartiality of the Judiciary . She has failed to meet the minimum standard of conduct to be observed by each and every Judicial Officer and therefore must be held accountable to legal and ethical standards via a formal petition to the National Judicial Council for disciplinary action and /or sanction against her .

In the interim, Effiong ask me to thank his colleagues, friends , supporters, well wishers and the general public for their support and that they should be rest assured that he is hale and hearty and that a team of lawyers lead by Femi Falana SAN are working on his case.