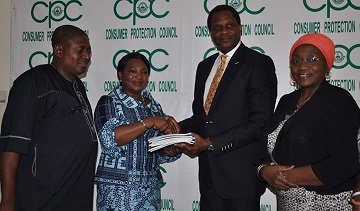 The Consumer Protection Council (CPC) has assured that it will ensure all interests are balanced in the enforcement of the provisions of the National Tobacco Control Act 2015 for the protection of consumers.

CPC’s Director General, Babatunde Irukera made the assertion on Wednesday (July 19, 2017) at the Council’s headquarters in Abuja when a delegation of the Nigerian Tobacco Control Alliance led by the Chairman of the alliance Governing Board, who is also the Deputy Director of the Environmental Rights Action, Mr. Akinbode Oluwafemi and the Sub-Regional Coordinator, West Africa, of the Campaign for Tobacco-Free Kids, Mrs. Hilda Ochefu, paid him a courtesy call.

The Alliance visited the Council’s chief executive to request the organisation to play a pivotal role in the enforcement of the nine provisions of the National Tobacco Control Act, among others.

He said as far as the Council is concerned the welfare of consumers in the country remains its primary focus and as such the Council would do all that is necessary within the ambit of law to protect them while preserving their right to choice.

According to him, “as far as we are concerned, the law is supreme, and one of the things we try to convey to industry is that consumer is king and we will continue to treat consumers with the royalty they deserve in whatever it is that we would do.

“There is a national tobacco control policy, which we are quite aware of. We recognise the need to collaborate with other regulators. For instance, we know that the Standards Organisation of Nigeria (SON) is responsible for standards whether it’s the chemical components standards or the packaging and labeling standards. It appears that the Tobacco Control Act makes some fundamental provisions that might affect those. We are studying the provisions and we are looking at what the roles of the Consumer Protection Council should be with respect to them, and what the relationship between what the Act says and what the existing Nigerian National Industrial Standards (NIS) stipulates,” he stated.

Irukera told the tobacco alliance delegation that CPC is quite conscious of its role of protecting consumers “sometimes even from themselves”, stressing that “certainly our role is to protect people in the choices they make and allow them to make those choices, and also to protect those who may be exposed to potential injury on account of the choices that other people make”.

He further clarified the position of the Council as a regulator, which according to him, is to ensure regulations and laws guiding the industry are strictly adhered to for the protection of consumers.

The director general said: “We recognize and respect your position as a civil society organisation and that your role is essentially anti-tobacco, and we respect that. But you must recognize that our role as a regulator is not anti-tobacco. Our role as a regulator is to balance the field and to protect consumers and indeed we will do that, because there are people who consume the product that you are against, whom we also have an obligation to protect.

“We understand all the different dimensions of the obligations that the law imposes on us, but rest assured that with respect to that balanced approach to regulation, you will always have a partner in us. It doesn’t mean we will necessarily always agree, but to the extent that the objective is the same, you can be sure that we will be there to fulfill what we believe are our obligations”, he emphasised.

Earlier, the tobacco alliance delegation had told the director general that Civil Society Organisations (CSOs) are ready to partner with the Council to build the capacity of its staff to play necessary roles in enforcing the nine provisions of the Act announced by the Minister of Health.

The delegation also charged the Council to use its structure to drive the enforcement of the nine provisions; to champion the cause of smoke-free Nigeria; to support a quick adoption of the tobacco control regulation by the National Assembly; and to stand for an increase of tobacco taxes to discourage youth initiation as well as to boost government revenue.