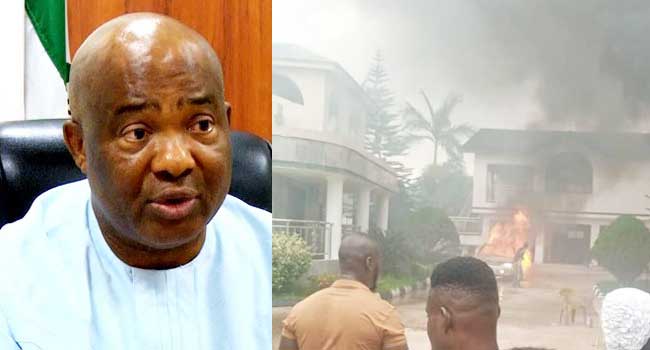 Hope Uzodinma, the governor of Imo State, has responded to the burning of his country home in the state’s Orlu East Local Government.

According to preliminary investigation into the attack, the incident may have been politically motivated, according to Uzodinma.

According to the governor, the attackers were hoodlums who arrived in a motorcade of three cars, followed by a lorry with tyres used to set fire to the house.

In response to the incident, the governor said that the arsonists were repelled by vigilantes in the area.

Uzodinma also urged security forces to apprehend those responsible for the incident.

Declan Emelumba, the state’s Commissioner for Information and Strategy, confirmed this.

A statement by Emelumba reads partly: “Gallant security operatives this morning repelled an attack on the Omuma country home of the governor of Imo State, Sen Hope Uzodimma.

“However, vigilant security operatives attached to the Governor’s house successfully repelled the attack and consequently minimised the damage they had planned to unleash.

“In the crossfire that ensued a few casualties were recorded. Preliminary investigation suggests that the foiled attack may have been politically sponsored
“The government has ordered the appropriate security services to conduct a swift investigation into the incident and arrest and prosecute the sponsors and their agents.”