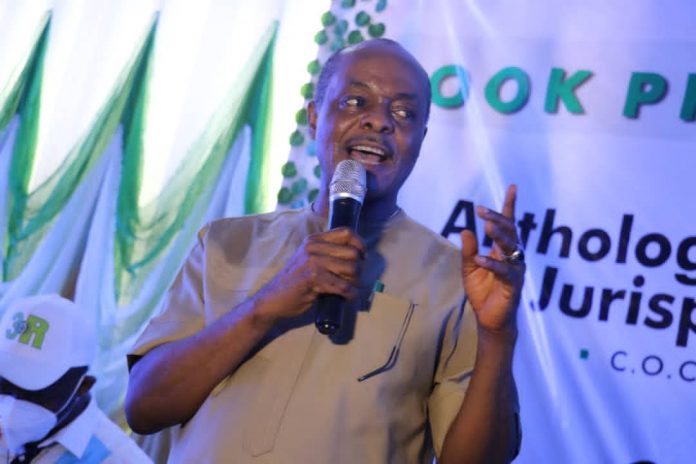 It was encomiums galore in the cavernous interior of the majestic Imo Concorde Hotel in Owerri, the Imo state capital, as the cream of society gathered to celebrate the literary prowess of one of their own, a man of no mean intellectual pedigree in both the literary and legal worlds. The occasion was the formal public presentation of a seminal work on the roots and evolution of African jurisprudence before the arrival of Europeans on these shores, and the impact of Western civilization – and especially its laws – on our legal ecosystem with the advent of colonization.

NEWSWIRE Law and Events Magazine correspondent in Owerri reports that the launch of the book, ‘Anthology of African Jurisprudence,’ by Chief C. O. C. Akaolisa, the Honorable Attorney-General and Commissioner for Justice in Imo State, was graced by current and past political office-holders, captains of industry, members of the academia, and legal practitioners on both the Bar and the Bench, and was chaired by a retired Chief Judge of the state, Hon. Justice B. A. Njemanze.

Among the other notable attendees at the event were the Commissioner for Information, Sir Declan Emelumba (who represented the Imo State Governor, His Excellency Sen. Hope Uzodinma at the occasion); the Hon. Justice Theresa Chukwuaka, the Acting Chief Judge of the state; Dr. A. B. C. Orjiakor (the chief launcher, who was represented); and the co-launcher, Chief Charles Amadi. Others were Chief Livy Uzoukwu, SAN; Dr. Cletus Ilomuanya, CON, a former chairman of the state council of traditional rulers; Sen. Ezenwa Onyebuchi, representing Imo East senatorial zone in the upper federal legislative chambers; two state legislators, the Right Hon. Godfrey Ikeocha and Hon. T. O. E. Ekechi; and Eze Emma Okeke, head of the state’s community policing agency, among others.

The academic community was well represented at the occasion – in the persons of Prof. Achulika Akah of the Imo State University, and the book reviewer, Prof. U. U. Chukwubueze, SAN – who served as the dean of the faculty of law in both the Imo and Abia State Universities, as well as becoming the academic from the state to take the coveted silk.

Welcoming guests to the occasion, the Chairman, Hon. Justice Njemanze described ‘Anthology of African Jurisprudence’ as a comparative analysis of the relative merits of African jurisprudence at a time when it held sway, versus the European model which supplanted it in colonial times. In particular, the eminent jurist said, arbitration and mediation were a first resort in the dispute resolution mechanism of traditional jurisprudence – rather than a last (or alternative) resort, as obtains in the European model now in operation. Noting that Akaolisa had, in 2003, penned a similar work, ‘Principles of Igbo Law and Jurisprudence,’ Justice Njemanze praised the author for his fidelity to this subject and his concern for the preservation of certain aspects of our traditional values as encoded in our laws. From these two works, which are pioneers in their field, the former CJ asserted, it is clear that certain aspects of our laws and law-making machinery were far more advanced than their European counterparts – partly due to the democratic and meritorious impulse that undergirded those laws.

In that sense, he concluded, the book was important, not just for lawyers and Judges, but for every body desirous of learning about – and reviving – the positive aspects of our neglected values, and a clarion call to all Africans to know themselves and where they are coming from, the better to chart a progressive and sustainable path to where they want to be.

Also speaking, the author, C. O. C. Akaolisa (or simply COC, as he is popularly known) called his work an exploration into the ‘hitherto unknown’ area of African jurisprudence – and an attempt at refuting prevailing Eurocentric notions about law and order (or lack thereof) in traditional African society. The book is a compendium of writings on the subject by scholars and legal minds from across and beyond the continent. Apart from the arbitral system alluded to by the Chairman of the occasion, the author said, the witness system in the African legal milieu, among other judicial concepts, was different from the European one.

As a follow-up to this launch, the AG disclosed, his ministry would initiate an annual series of lectures into the subject of African jurisprudence, during which scholars in the legal, philosophical and sociological fields from far and wide would explore ways in which to incorporate the relevant aspects of African jurisprudence into our modern law-making machinery.

Reviewing the anthology, Prof. U. U. Chukwubueze, SAN went down memory lane in an exploration of the attitude of the British colonialists towards the preservation (or abrogation, in whole or in part) of so-called ‘native’ laws – from the precedents set by the likes of John B. Croft, Her Majesty’s First Counsel in the Bights of Benin and Biafra (now Bonny); and Sir James Marshall, the first Chief Judge of the Gold Coast Colony (later to become independent Ghana); to Lord Frederick Lugard’s ‘indirect rule’ and its application in the Protectorate of Northern Nigeria, etc.

Apart from a book by one Mr. Park, a Briton, titled ‘Sources of Law in Nigeria’, as well as laudable attempts by Nigeria’s former Chief Justice, Hon. Justice T. O. Elias to articulate a common legal template in the country (to incorporate both local and European legal concepts), the learned Professor said, there has been no serious attempt to study African jurisprudence in exhaustive detail until the emergence of Chief Akaolisa.

Far from the existential impulses of European jurisprudence, Prof. Chukwubueze said, the African model was a mirror of her philosophical and cultural underpinnings. Law in traditional African society transcended the boundary between observable reality and myth, and exposes the arrogant Eurocentric narratives of their superiority in this respect, and the relative ‘barbarism’ of the African model. As seen in the anthology, he added, African legal philosophy is based on positivism, as well as leadership based on good citizenship. The book, he concluded, was a rigorous analysis of customary law, and in it, what was once opaque has now become transparent.

The state’s acting Chief Judge, Hon. Justice Chukwuaka echoed the reviewer’s sentiments as she asserted that the book was more about identity, cultural heritage and time-honored values than strictly about law – and therefore of general importance to all right-thinking stakeholders in the regeneration of our society.

According to NEWSWIRE’s correspondent at the event, the business end of the book launch was kicked off by Sir Declan Emelumba, the Imo State Information Commissioner who stood in for Gov. Uzodinma. “We haven’t read the book yet,” he said, paraphrasing a renowned statesman, “but we have read the author.” He went on to praise Chief Akaolisa for his stewardship in the State Executive Council and his accomplishments so far in the Justice Ministry.

Other distinguished guests – or their able representatives – also paid glowing tributes to Chief Akaolisa, and extolled the timeliness and potential impact of ‘Anthology of African Jurisprudence’ before announcing the amounts for which they were acquiring the book.
A concluding highlight of the evening was the cutting of the ceremonial cake to bring the short but eventful presentation ceremony to a close.