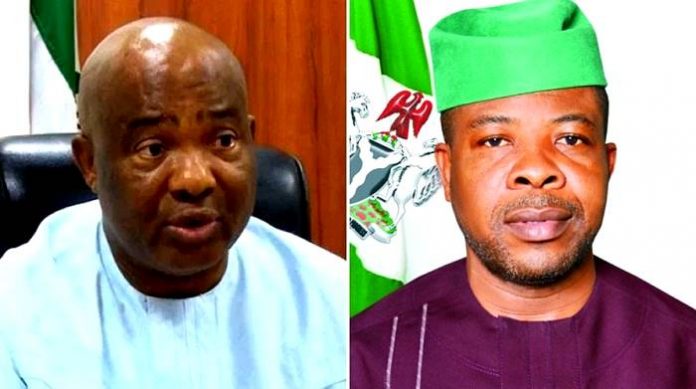 Imo state government has asked the federal government and the National Assembly to probe why and how Rt Hon Emeka Ihedioha was declared winner of the guber elections in 2019.

It noted that although the Supreme Court had already declared Senator Hope Uzodimma as the rightful winner of the election, there was a need to probe the circumstances that led to Ihedioha’s declaration as Governor when he didn’t meet the Constitutional requirements.

Speaking during an interview with Federal Radio Corporation of Nigeria , the state Commissioner for Information and Strategy, Hon Declan Emelumba said there was an urgent need for Nigerians to know who flagrantly abused the constitution and appropriate sanction meted  to them.

According to Emelumba,” Section 179 of the constitution is clear how a candidate can be declared a governor. Subsection A of the section states that if the candidate has the majority of lawful votes cast in the election while subsection B states that if the candidate has not less than one quarter of votes cast in each of at least two thirds of all the local government areas in the state”.

He said going by the Constitutional requirements, Ihedioha did not get one quarter of votes cast in 18 LGs which is two thirds of the 27 local government areas of the state. According to him,  INEC only declared him winner in 10 LGS, 7 short of the required 18 LGs, yet  he was declared winner of the election.

Asked if the Government was not satisfied with the Supreme Court judgement which restored Uzodimma”s victory, Emelumba said they were satisfied because justice had been served.

Emelumba insisted that those who raped  the Constitution including the beneficiaries ought to be brought to book.

Said he”, it is not enough that Ihedioha was removed from office. He and his collaborators need to be punished.

He said the Government of Imo State believes that a thorough probe by the federal government into why Ihedioha was declared governor when he didn’t win the election will help sanitize the electoral process.

The commissioner also used the occasion of the FRCN interview to debunk the propaganda that Gov Hope Uzodimma was not popular in Imo and cannot move freely.

According to him, the purveyors of the propaganda are enemies of progress as the governor’s popularity is very high owing to the level of infrastructure he has executed in the state.