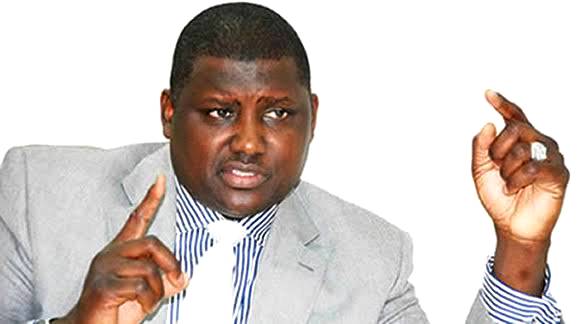 Maina, who was on November 8, 2021, sentenced to eight years in prison for money laundering, had approached the court, accusing the government of not allowing him to seek medical treatment in a hospital of his choice.

He insisted that he was suffering from a life-threatening ailment that would require urgent medical attention.

Cited as 1st and 2nd Respondents in the suit marked: FHC/ABJ/CS/1729/2022, were the Minister of Interior, Rauf Aregbesola, and the Controller-General of the Nigerian Correctional Service.

Specifically, the Applicant, prayed the court to issue an order of perpetual injunction, restraining the two Respondents from preventing him from seeking medical attention from reputable and recognized hospital of his choice.

He argued that not allowing him to access treatment from a medical facility of his choice, amounted to a gross violation of his statutory rights as a prisoner.

However, the court, in a judgement that was delivered on Wednesday by Justice Inyang Ekwo, dismissed Maina’s suit as lacking in merit.

The court, said there was no verifiable evidence that was placed before it to establish that the Applicant was suffering from any life-threatening ailment.

Justice Ekwo held that such express demand amounted to a deliberate attempt by a prisoner to hold the state to ransom.

More so, the court, held that authorities of the Correctional Service did what the law required of them, by taking the Applicant to the Cardiological Department, Orthopaedic and ENT Departments of the University of Abuja Teaching Hospital, Gwagwalada for about 23 times.

The judge held that uncontroverted proof of evidence before the court showed that the convicted former pension reform boss was provided with medical attention and treatment that was suitable for his situation, as at the time he filed the suit.

“Taking a prisoner to a hospital for 23 times demonstrates care and attention on the part of the custodial authorities”, Justice Ekwo held.

The court stressed that Maina did not provide any compelling evidence to prove that any of the Respondents had in any way, infringed on any of his basic and statutory rights, while in their custody.

It held that from evidence that was adduced by the parties, it appeared as if the Applicant was not looking for medical treatment, but for an indulgent lifestyle while in prison.

The court held that no portion of the law stipulated that any prisoner, including the Applicant, must be treated as a privileged person with absolute rights.

“This application is a ruse and an attempt to belittle the essence of criminal conviction”, the court held, saying it was aimed to aid the Applicant, Maina, to live above the law.

“I find that the application lacks merit and I make an order dismissing it”, Justice Ekwo held.

It will be recalled that Maina was convicted, after he was found guilty on all the 12-count money laundering charge the Economic and Financial Crimes Commission, EFCC, preferred against him and his company, Common Input Property and Investment Limited.

Trial Justice Okon Abang held that Maina’s eight-year jail term would run concurrently, with effect from October 25, 2019, which was the day he was arraigned.

He ordered Maina and his firm to forfeit about N2.1billion that was traced to their bank accounts, as well as another sum of $223, 396, 30, to the Federal Government, after which he directed that the company should be wound up.

Maina, whose 22 years old son, Faisal, was also facing a separate money laundering case, had in the course of his trial, jumped bail and escaped from the country.

He was subsequently re-arrested in Niger Republic and brought back to the country for continuation of his trial.

The court had after he jumped bail, remanded his surety, Senator Ali Ndume, in prison custody.

It ordered Ndume who is representing Borno South Senatorial District, to either produce him or to forfeit his N500million bail bond.

Alternatively, the court directed the sale of Ndume’s property situated at Asokoro in Abuja to raise the N500m it said should be paid into the Federation Account.

Meanwhile, after he regained his freedom on November 27, 2020, following Maina’s re-arrest, Ndume, applied to the court and withdrew from the case.

Maina’s son equally escaped from the country after he was released on bail, with the EFCC alleging that intelligence report revealed that he ran to the United States of America, USA.

Even though Faisal is still at large, Justice Abang tried him in absentia and in a judgement he delivered on October 7, 2020, convicted and sentenced him to 14 years imprisonment.