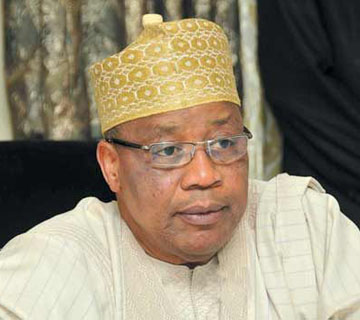 The book, ‘On a platter of gold: How Jonathan won and lost Nigeria,” written by former minister of sports and current National Publicity Secretary of APC claimed that Babangida tried to get Tinubu to back Jonathan ahead of the last presidential contest. The book is yet to be released to the public.

In the book described by Jonathan as “a tissue of lies” Abdullahi claimed that a meeting was held in the Abuja residence of Babangida, at the instance of Jonathan, where the former military leader tried to convince Tinubu to jump ship.

Though the author did not give the date of the said meeting, he, however, explained how Tinubu pointedly refused to bulge, despite pleas from Babangida.

Abdullahi wrote that Tinubu turned down any form of partnership with Jonathan over claims that the former president did not keep previous agreements they had in the run up to the 2011 presidential election.

Again, the author did not list the four agreements.

“Yet again, he approached Babangida and asked him to help broker a meeting, which was held in Babangida’s house in Abuja. But Tinubu was not as accommodating as he had been four years earlier.”

“He (Tinubu) reminded Jonathan of the small print of their agreement in 2011, when the president had promised to do four things for Tinubu in return for his support.

“Now, he (Tinubu) asked Babangida to ask Jonathan which of the four promises he had kept. Then a clincher: the APC leader asked Jonathan what made him think that he, Bola Tinubu, did not also want to be president of Nigeria?” he wrote in the book. In the 397-page book, the former minister detailed how the wrong handling of the abduction of over 200 Chibok schoolgirls by the Federal Government played a role in the electoral defeat of Jonathan.

On page 204 of the book, he wrote, “the slow pace at which the government responded to the incident had damaged his (Jonathan’s) credibility irreparably. Many believe he (Jonathan) became interested only because of the global attention the incident received and the protests it sparked in Nigeria and around the world.”

Abdullahi made other claims of what played out before, during and after the 2015 presidential elections.

“I am aware that General Ibrahim Babangida tried to reconcile former president Goodluck Jonathan and Senator Bola Ahmed Tinubu, but the reconciliation didn’t work out as a result of what they called irreconcilable differences. He was doing that for the sake of political stability at that level of leadership.”

“IBB’s position was that whatever be their differences, they needed to reconcile and move on but both of them knew what their issues were and didn’t want to shift ground,” he stated.