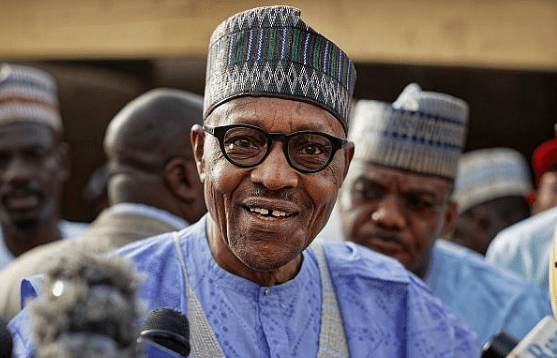 I Take Responsibility for APC’s Losses at Elections – Buhari

President Muhammadu Buhari said that as leader of the All Progressive Congress (APC), he will not escape responsibility for its recent electoral losses, but his priority is to establish a political culture based on integrity.

He made the declaration while receiving Governor Godwin Obaseki of Edo State, his deputy, Philip Shaibu, their spouses and other prominent members of the Peoples Democratic Party (PDP) on a “thank you” visit at the presidential villa, Abuja on Friday.

President Buhari said that his single desire is to make sure that innocent Nigerians don’t suffer regardless of party affiliation.

He said: “I thank you for bringing your deputy and supporters to come and see me after beating my party. I am supposed to preside over all Nigerian interests whether I like it or not, but my single desire is to make sure that innocent people don’t suffer.

“That message I got across to the Inspector General of Police, that elections must be free and fair.”

According to the President, “If contestants have too much money and they decide to spray, so be it. But what I insist is, nobody should go and raise a counterforce to the government, arm heavily-drugged thugs to go and humiliate people.”

He told his guests that, “I want Nigerians to appreciate that I respect them as Nigerians and that I am bound by the oath I have taken, that their security is in the hands of God and in the hands of the government, which I am leading.”

President Buhari noted that as the leader of the governing party, and despite the fact that the party has lost some states in elections, he wishes to leave behind a political culture based on integrity.

“We have lost states across the country. Now I do not like to escape the responsibility, seeing as the leader of the country, I am also the leader of my party, that I am not leading the party very well.

“I am trying to make sure that the party is built on a civilised basis, rule of law and respect for human rights and human beings, right from polling units to local governments, to states up to Abuja and that’s what I have been insisting as my contribution to the National Working Committee and executive of the party.

“Let people work very hard and earn what they are looking for through their hard work and through fair competition,” the President said.

He added jocularly that he was congratulating the Edo governor “reluctantly” because he defeated the candidate of his party, the All Progressives Congress.

In his remarks earlier, Obaseki thanked the President for ensuring that fair play reigned during the election which saw him victorious.

He said: “You would recall a couple of weeks before the election, I came to see you and you assured me that we were going to have a free, peaceful and credible election. That is what we had during the election of 19th September and the whole world has acclaimed that Edo election was perhaps one of the best conducted in recent times in Nigeria.

“This could not have been possible without your insistence that the right things be done, and for that, we want to say thank you very much.”

He also thanked the President for his congratulatory message, assuring him that the message “has been internalised, that it is God that made this election possible. Therefore? I should be humble about the election and also magnanimous in victory.”

He pledged his unalloyed loyalty and support and that of the people of Edo State to the President and the federal government.

Fielding question from State House Correspondents after the meeting with the President, Obaseki said he will not return to the APC as it will go against his moral and ethical foundation.

Recall that the governor dumped the APC for the Peoples Democratic Party (PDP) following his disqualification from the party’s gubernatorial primaries.

Obaseki stated: “The answer to your question, gleaning from the comments of Mr President, he said that he wants to leave a democracy that is built on integrity, accountability and hard work. Those were his words and I subscribe totally to that.

“It will not show integrity, it will not demonstrate somebody that has an ethical or moral foundation to do what you asked about.

“I couldn’t have contested on a party, won on that party and then consider moving to another party. It is not the kind of thing to do, it’s not the right thing to do and I am sure you will not encourage me to do that.”

The governor, who ran on the basis of ending godfatherism in Edo state, said he will not replace former APC National Chairman, Comrade Adams Oshiomhole, as the new godfather of Edo politics.

He added: “In the case of godfathers in our politics, I have said in several fora that the whole concept of godfatherism is very dangerous to our democracy. And that is why when we came into the political fray 2006/2007, the mantra then was to get rid of godfathers from our political life.

“So, if we allow that sort of situation to continue, it will be worse than military rule. When people who have nothing at stake, no checks and balances just arbitrarily decide that this is the way the constitution should be interpreted or constitutional players should operate, that’s why problems come in.

“God forbid I become a godfather, I should be dealt with accordingly because it’s dangerous to the concept of democracy.”

On how to heal the hurt created by the gruelling campaign, he appealed to all Edo people to come together and work with him, saying: “It is really unfortunate that there is so much bitterness and I can assure that most of it did not come from my camp because, we were not desperate, but that is neither here nor there.

“So, it’s not that in the past such hurtful words, hateful speeches were not used but it was never at the level of proliferation and spread as it has had now because of social media.

“We will continue to try and heal the land. Fortunately, it doesn’t show that Edo people are divided. It shows essentially that Edo people have come together under one umbrella. That is what the election has shown.

“We will continue to appeal to those who are outside our umbrella to work with us for the benefits of our people.

“Of course, what is the purpose of the election anyway? Is it not a contest for who will rule the people better? If the results of this election have shown that Edo people trust that I will at this point in time be able to govern Edo better, give them what they want at this time.

“Then, my plea to the people is that everybody should join me so as to be able to accomplish that goal.”

Among party members who came with him on the visit were Senators Clifford Ordia and Matthew Uroghide; and former Nigeria’s Foreign Affairs Minister, Chief Tom Ikimi.