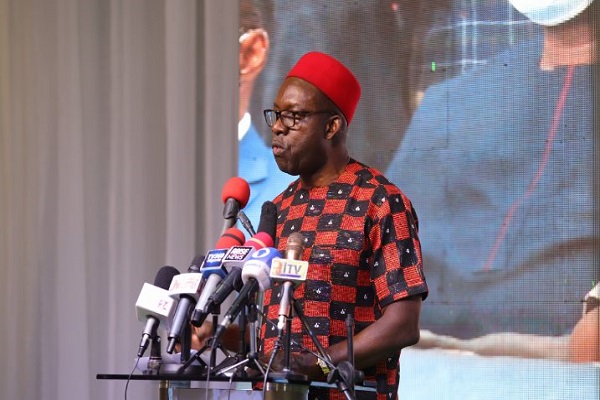 A former Governor of the Central Bank of Nigeria, Prof Charles Soludo has narrated his personal experience when he undertook some reforms in the banking sector.

Soludo, who is the governor-elect of Anambra State, said he received 19 written threats, including physical attacks for undertaking the banking revolution in Nigeria.Soludo served as governor of CBN from 2004 to 2009.

He disclosed this as a guest speaker at the first Graduation Day of students of School of Politics, Policy and Governance (SPPG), founded by a former Minister of Education, Dr Obiageli Ezekwesili, on Saturday in Abuja.Soludo noted that disrupting the existing social order was dangerous, saying beneficiaries of the current order are powerful enough to organise and viciously fight back to protect their privileges.

According to him, with the objective to retain power within the context of short electoral cycles, politicians are afraid to undertake the necessary disruptive changes to guarantee long term safety and prosperity for all.The Federal Government recently backtracked on its decision to remove subsidy from petrol because of its likely backlash.

He said: “Oil is on its way out, but dismantling the decades-old debilitating institutions and politics around it won’t be a tea party. Nigeria is now at a fiscal cliff with a crunching solvency challenge. Youth unemployment, insecurity, poverty, inflation, etc threaten the social fabric. Migrating to a post oil world of 4th Industrial revolution and sustainable prosperity will require massive disruptive transformations and restoration of a productive social contract.

“Such disruptions will come at great costs, and could indeed be dangerous. It is not far to imagine what could befall serious disruptors. In Nigeria, we remember what happened to Murtala Muhammed, and the history books are replete with hundreds of examples of the inherent risks.

“At a personal level, undertaking the banking revolution in Nigeria came with 19 written threats to me and my family, including physical attacks. Disrupting the existing social order is dangerous. Beneficiaries of the current order are powerful enough to organize and viciously fight back to protect their privileges.

“On the contrary, the masses who are the ultimate beneficiaries are not organized enough to act as a bulwark against the special interests. As things stand currently, we are standing between the rock and the hard place. With the objective to retain power within the context of short electoral cycles, politicians are afraid to undertake the necessary disruptive changes to guarantee long term safety and prosperity for all.

“On the other hand, the existing trends are totally unsustainable and the system is living on borrowed times. Everyone is sleepwalking to the hard place, and praying that somehow a miracle will happen along the way.

“So, who is ready to put his head on the line to lead such productive but dangerous disruptions? Are the SPPG graduates ready for the assignment? I assume that you can’t wait to get to work, to apply your knowledge for a new Nigeria. Am I right? You have my prayers! As I pray for your success, let me throw up a few random nuggets to chew on your way.”

According to him, politics has become big business, adding that appointment or election into public office is seen largely as an opportunity to ‘eat’ rather than a call to selfless service.

Soludo lamented that less than one percent elite have a stranglehold on the public purse, sprinkling occasional crumbs to the citizens as ‘dividends’

He said: “Politics has become big business. Appointment or election into public office is seen largely as an opportunity to ‘eat’ rather than a call to selfless service. There is an army of rich (big men) who have never worked or done any productive work in their life and believe that it is their right to expect something for nothing.

“The tiny less than one percent elite have a stranglehold on the public purse, sprinkling occasional crumbs to the citizens as ‘dividends of democracy’. The citizens themselves either out of helplessness or acquiescence join the party, expecting the politicians to dole out pittance out of the public treasury as charity.

“The citizens actually clap for such phantom ‘charity.’ Politicians who refuse to do so are deemed as ‘stingy’ or ‘wicked,’ and the circus goes on. With a rentier system, a culture of freebies emerged, and most people don’t expect to pay for anything, including taxes, electricity, water, petrol, etc.

“A classic feature of the political environment is that corruption has become part of the ‘culture,’ with little incentive for honesty. Honesty is scorned as wickedness, foolishness or mere pretense, and those who dare to be different have a steep price to pay. So, who among you is ready to be honest and scorned by society?

In her remark, Dr. Ezekwesili lamented the way politics in Africa is being run, saying it had distorted the society.

Ezekwesili charged the graduates to embrace leadership skills that would transform the society. Leaders take the pain so that others can enjoy it.

“The society must be contested for and you should pioneer the space for that leadership,” she said.

She said that the school would be replicated in another six African countries as a way of liberating Africa out of extractive colonialism.