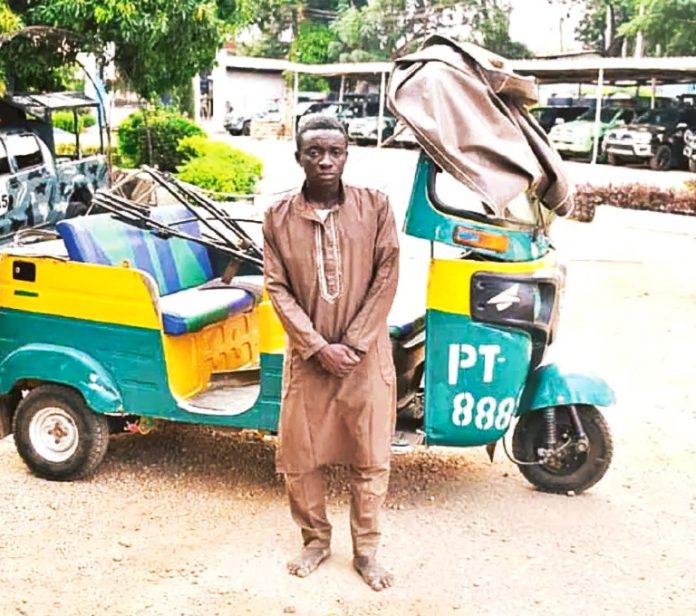 There was tension at the Anguwan Jarawa community, Jos North local government area on Monday when it was alleged that a tricycle rider and his friends were killed and his tricycle stolen when the rider went to the community to convey eggs from a poultry farm.

Recall that Jos is highly polarized and residences are based on religious, ethnic and other affiliations. It was gathered that the said tricycle rider, identified as Sani Abdullahi raised the false alarm about killing and theft to evade being caught as he planned to make away with the tricycle which belongs to one Hajia Amina who gave it out to him on hire purchase.

On getting the report of the alleged incident, security agents investigated and found the story to be false, as the tricycle rider was seen some days later at the Ali Kazaure area where he resides.

This however doused the tension which had made residents apprehensive. Explaining the situation, Major Ishaku Takwa, the Military Information Officer said, “On 1st November, 2021 there was a report by one Alh Abdulsalam Ibrahim from Ali Kazaure area of Jos North that one Mr Sani Abdullahi was killed by youths of Anguwan Jarawa in Jos North LGA.“That Mr Sani Abdullahi a tricycle driver popularly known as Keke NAPEP, while on his way to convey eggs from poultry located at Anguwan Jarawa in Jos Metropolis was killed by youths.

The tricycle driver claimed that he was attacked alongside his friends and the tricycle snatched from him, while his friends were killed. “This allegation generated tension in Jos Metropolis. It took the timely intervention of troops of Operation SAFE HAVEN and other security agencies to maintain calm in Jos Metropolis.“Also, the troops with other security agencies conducted extensive search around Anguwan Jarawa where the killing was alleged to have occurred and hospitals in Jos and no information on any injured person who reported for treatment or corpse deposited in any of the hospitals.

“We also deployed intelligence to continue to monitor the situation and report accordingly. Yesterday, being Wednesday 3rd November, 2021, Mr Sani Abdullahi who was reported to have been killed resurfaced at Ali Kazaure area.

“He was immediately arrested and preliminary investigation revealed that Mr. Sani Abdullahi collected the tricycle (Keke NAPEP) from one Hajia Amina on hire purchase and dubiously attempted to retain the tricycle without paying for it. That is why he claimed that he was attacked alongside his friends and the tricycle snatched from him while his friends were killed.

“The suspect also confessed to have taken the tricycle to Saminaka, Kaduna State for safe keeping.

“Following this confession, the Commander, OPSH Maj General Ibrahim Ali ordered the recovery of the tricycle.

“Accordingly, our troops went to Saminaka and successfully recovered the tricycle. The Commander OPSH while appreciating the community leaders who helped in dousing the tension in Jos metropolis, wishes to use this medium to call on members of  the public to always report criminal elements in their midst and desist from taking the laws into their hands”.

However, a resident of Anguwan Jarawa, John Bako said the community was surprised to hear of the allegations when nothing like that happened and appreciated security operatives for unraveling the truth on time and averting unwarranted violence in the area.

According to him, “This boy who raised the false alarm should be severely punished to deter others from spreading dangerous accusation which is capable of causing the lives of innocent people.

“Imagine what would have happened to unsuspecting public if the truth was not uncovered and on time too.

“A lot of people come in here, do their legitimate businesses and go back, we are not a threat to anyone, the allegation should not be treated lightly”.