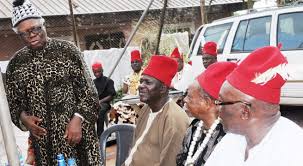 In Biafra, under three years, they were making their own rockets and calculating its distances; distilling their own oil and making aviation fuel, creating in their Chemical and Biological laboratories, new cures for diseases like Cholera, shaping their own spare parts, and turning the entire East into a vast workshop, as Ojukwu put it.

At the end of the war, the Ukpabi Asika regime brought together these Biafran scientists and set up PRODA. The initiative led, in the first five years between 1970 and 1975 under the late Prof. Gordian Ezekwe and Mang Ndukwe, to designs of industrial machinery models and prototypes for the East Central State Industrial Masterplan, which remain undeveloped even today. The Murtala/Obasanjo regime took over PRODA in 1975 by decree, starved it of funds, and basically destroyed its aims.

Secondly, Federal government policies centralised all potentials for innovation and entrepreneurship. Before 1983, states had their Ministries of Trade and Industry. These were charged with local business registration, trade, and investment promotion, and so on. But today in Nigeria, if you wish to do any business, you’d have to go to Abuja (it used to be Lagos) to register under the Corporate Affairs Commission. It used to be that local business registration which was state and municipal functions. The concentration of the leverage for trade utterly limited Igbo entrepreneurs, particularly in the era of import licensing, once your quota was exhausted, you could not do business.

This affected the old Igbo money in Aba and Onitsha, who were the arrowheads of innovation and traditional partners in the advance of Igbo industrial economy. It is remarkable that as at 1985, a list of book published by the Oxford Economist Tom Forrest in 1980, The Advance of African Capital, the Igbo had the highest investment in machine tools industries in all of Africa, and the highest depth of investment in rural, cottage industries. In his prediction in 1980, if that rate of investment continued, the Igbo part of Africa would accomplish an industrial revolution by 1987. By 1983/85, Federal Government policies helped to dismantle the growth of indigenous Igbo Industry through its targeted national economic policies. As I have said, there is a corollary between industrial development and innovation.

Thirdly, the severe, strategic staunching of huge capital in-flow into the East starved Igbo businesses and institutions of the capacity to utilise or even expand their capacities. There were no strategic Federal Capital projects in the East. There were no huge infrastructural investments in the East. The last major Federal Government investment in Igbo land was the Niger Bridge, which was commissioned in 1966. Any region starved of government funds experiences catatony and attrition. Private capital is often not enough to create the kind of synergy necessary for innovation. Rather than invest in the East, from 1970 to date, the Federal Government has strategically closed down every capacity for technological advancement in the East and stripped that region of its capacity.

By 1966, the Eastern Nigerian Gas master-plan had been completed under Okpara. But in its review of a Nigeria gas master-plan, the Federal Government strategically circumvented the East. Oil and gas are under federal oversight. The Trans-Amadi to Aba industrial gas network/linkage had been completed in 1966, to pipe gas from Port Harcourt to Aba. The Federal Government let that go into abeyance and uprooted the already reticulated pipes. The East was denied access to energy with the destruction of the Power stations during the war.

The Mbakwe government sought to remedy this by embarking on two highly critical area of investment necessary for industrial life: the five zonal water projects, which were 75 per cent completed by 1983, and set for commissioning in 1984, which was to supply clean water for domestic and industrial use to all parts of the old Imo State, and the Amaraku and Izombe power stations, under the Imo Rural Electrification Project. These were the first ever-massive independent power projects ever carried out by any state government in Nigeria, which would have made significant part of Igbo land energy independent today. The supply of daily electricity was possible in Imo as at 1984. The Amaraku station had come on stream, and the Izombe Gas station was underway, when Buhari and his men struck.

Ground had already been acquired and cleared on the Umuahia-Okigwe road to commence work by the South Korean Auto firm, Hyundai, under a partnership with Imo for the Hyundai Assembly plant in Umuahia, to cater for a West African market. The first order of business under the Buhari government in January 1984, was to declare all that investment by Mbakwe “white elephant.” They were abandoned, and left to decay. The equipment at the Amaraku power station was later sold in parts by Aneke during Abacha’s government. Some of the industries, like the Paint and Resins company, and the Aluminium Extrusion plant in Inyishi were privatised, and sold. Projects like the massive Ezinachi Clay & Brick works at Okigwe are at various stages of decay, as memorial to all that effort.

Mbakwe and Jim Nwobodo changed all that in 1981, when they pushed through their various states Assembly the bills establishing the old Anambra State University of Technology (ASUTHECH), under the presidency of Kenneth Dike, and the Imo State University (IMOSU) with its five campuses under the presidency of Prof MJC Echeruo. The master plan for these universities as epicenters of research and innovation in the East were effectively grounded with the second coming of the military in 1984, and the diminution of their mission through under-funding, etc.

As I have said, I have given you the very short version. After a brief glimpse of light between 1979 and 1983, Igbo land witnessed the highest form of attrition from 1983 to date, and the destruction of the efforts of its public leadership to restore it to its feet has been strategic.