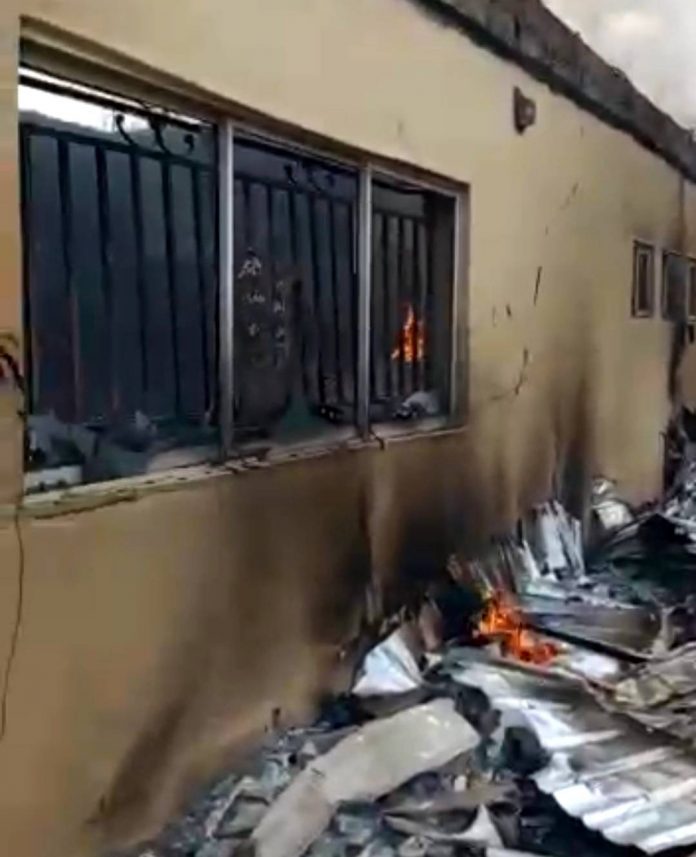 Hoodlums have set ablaze the office of the Independent National Electoral Commission, INEC, in Izzi Local Government Area of Ebonyi State, destroying, among others, 340 ballot boxes and yet to be determined quantity of Permanent Voters’ Cards, PVCs.

The attack is the third on INEC’s local government offices in less than three weeks, following similar attacks in Ogun and Osun states on November 10, 2022.

INEC National Commissioner in charge of Information and Voter Education Committee, Festus Okoye, disclosed this in a statement, yesterday.

“The incident occurred around 10.00am when some unidentified persons set the entire building ablaze,” said Okoye.

He said although no casualties resulted from the attack, “the main building and all the movable and immovable items inside it were destroyed. These include 340 ballot boxes, 130 voting cubicles, 14 electric power generators, large water storage tanks, assorted office furniture and fixtures and yet to be determined quantities of Permanent Voters’ Cards.

“The attention of the Nigeria Police Force and other security agencies has been drawn to the incident and have commenced investigation,” said Okoye.

communities of Adiadia and Issiet Ekim, in Uruan Local Government Area of Àkwa Ibom State, are in mourning mood, following the invasion and killing of six persons by sea pirates.

Besides, houses were razed at Issiet Ekim and a phone shop was looted at Adiadia, making residents desert the communities.

A resident said: “The Issiet community is deserted. We leave the community at 6 pm and only return in the morning. We live in fear, but we are assured that security will be beefed up with the establishment of security posts in the two communities,” a source  said.

Meanwhile,  Akwa Ibom state deputy governor, Moses Ekpo,  has condoled with the people of the communities over the loss of lives and property in the attacks.

Ekpo, who was accompanied on the visit by the  Commissioner of Police, Mr O A Durosinma, and the Chairman of Uruan Local Government, Surveyor Iniobong Ekpenyong, said the government was concerned about the welfare of its people and would do everything within its power to avenge the deaths and ensure that succour is brought to the communities.

He announced that with two Divisional Police stations established in the area, a full-force team would be deployed to patrol the communities which will further curtail the security threat.

He stated that there was a need for oneness among the people so that effective communication could flow between the people, security agencies and the government.

Earlier, the Commissioner of Police, Mr. O. A. Durosinma, said the police command would establish a division in the area, while working with the government to ensure that lives and properties are secured, by beefing the area with more police presence.

He added that the communities have a significant role to play in policing what belongs to them by being their brother’s keeper, while also affirming that more police officers will be deployed to the area.

For his part, the chairman of the Uruan local government, Iniobong Ekpenyong, expressed gratitude to the state government for the “show of love and concern towards the people of Uruan,“ while also assuring that government prioritizes the welfare of the citizens and will tackle the situation accordingly.