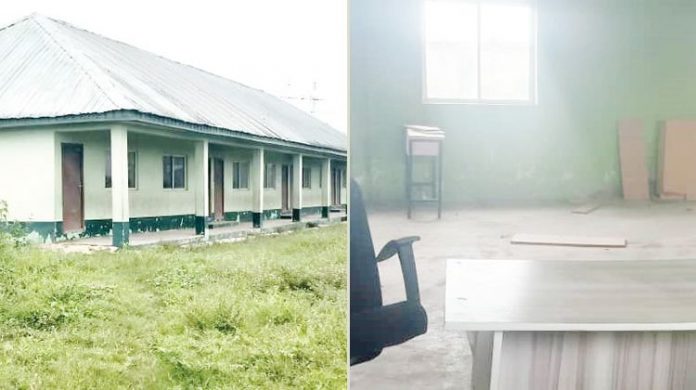 Residents of Alaaguntan in the Ewekoro Local Government Area of Ogun State were shocked to see the community primary school, Baptist Day School, emptied on Monday following a midnight invasion by suspected burglars.

The hoodlums broke the school’s ceiling to gain access into the classrooms, where they carted away valuable items.

The burglars reportedly stole classroom chairs, tables, bells and some documents belonging to teachers at the school.

The school, which is located between Elebute and Alaaguntan areas of Ogun State, is a three-block of classrooms accommodating many pupils from the two communities.

A teacher, who identified himself only as Adeyemo for security reasons, said that she got to the school on Monday only to see valuable items missing.

He lamented that the school, which was built by a construction company, Lafarge Plc, was equipped with modern facilities, which were stolen by the gang.

He said, “Maybe the modern chairs and tables that the company put in the school attracted the burglars.

“It came as a surprise to us when we met the school emptied on Monday.

“We have reported to the community head, and he promised to do something about it.”

The Village Head of Elebute, Abdulwaheed Onigbinde, confirmed the incident to our correspondent, adding that electricity wires were also stolen by the hoodlums.

He said, “I was told that some robbers invaded the school and carted away chairs, tables and community wires.

“I and the Baale of Alaaguntan will be meeting this morning (Thursday) to see what can be done.

“The place was built by Lafarge, so, we will be reporting the case to them before going to a police station.”

The pupils who were returning from the holidays on Monday discovered that their classrooms had been emptied.

They were reportedly turned back home as the school authorities vowed to investigate the incident.

The Ogun State Police Public Relations Officer, Abimbola Oyeyemi, said the command was not aware of the attack.

He, however, promised to look into it.