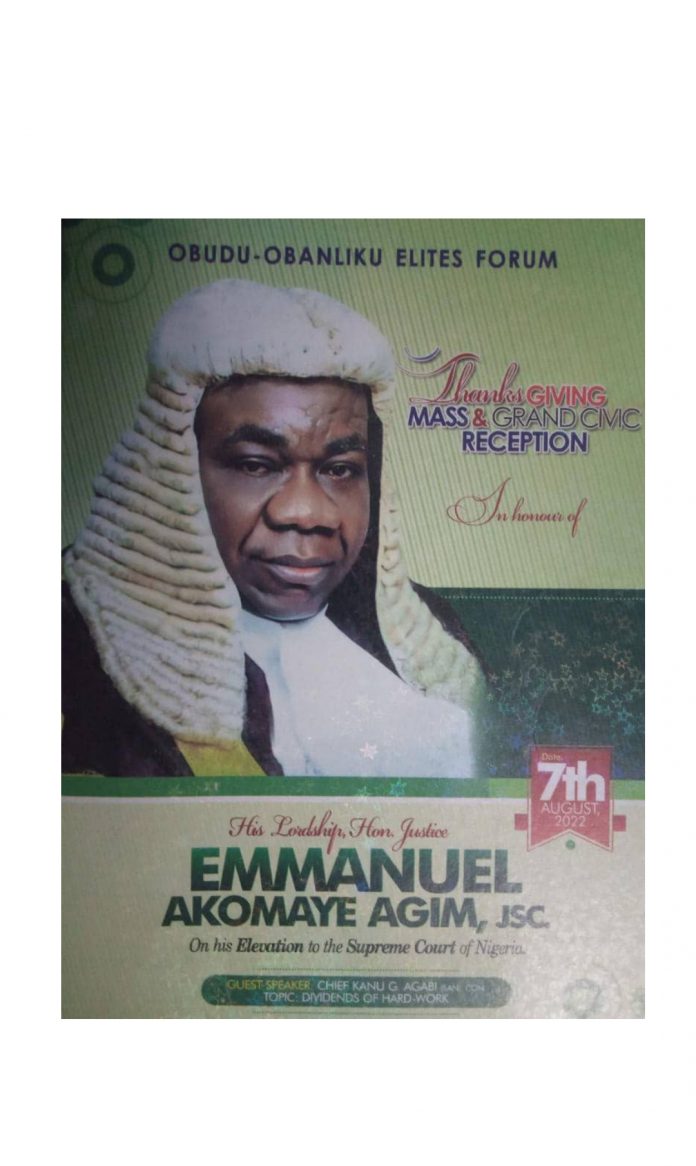 Obudu-Obanliku, Ogoja and indeed all Cross River State gathered yesterday and today, 6th and 7th August, 2922, in Calabar to celebrate Hon. Justice Emmanuel Akomaye Agim, JSC on his elevation to the Supreme Court.

The event which had the Governor of the State, Sen. (Prof.) Ben. Ayade in attendance, was hosted by the Obudu-Obanliku Elites Forum.

Also in attendance were several justices of the Supreme Court, Court of Appeal, Federal High Courts, High Courts and Customary Courts of Appeal.

Several members of the Bar were on ground to celebrate the erudite jurist and several awards were presented to him, including one presented by the Chairman of the NBA Ogoja Branch, Mr. Lazarus Izabi, Esq, and other branch members including Elder Marc Enamhe, Esq, S. E. Adie, Esq, Helen Unimke, Esq, Anne Agi, Esq and M. B. Agiah Esq on behalf of the branch.

Members of NBA Calabar came in thee numbers. Past Chairmen Dr Emmanuel idaka and Dr. Paul Ebiala were present. Members of FIDA Cross River State were all in attendance.

Hon. Justice Agim is the only Nigerian to have sat on the Supreme Court Bench of 3 African nations: The Gambia, Swaziland and now Nigeria.

Hon. Justice Agim was recalled back home to serve Nigeria as a Court of Appeal Judge in 2012 and on 6th Nov. 2020, he was elevated to the bench of the Supreme Court of Nigeria.

He was born on April 26, 1960, in Obudu, Cross River State Nigeria. He obtained his first degree at University of Calabar LLB(Hons), then BL from Nigerian Law School Lagos and subsequently LLM from the University of Wolverhampton, United Kingdom.

Justice Agim was enrolled as a legal practitioner on the 15th October 1986.

He was Chairman, General Legal Council.

He has held several offices and written several publications.

*One of his finest contributions to our jurisprudence was in the case of NWOKEDI V. ANAMBRA STATE AND ANOR where he deprecated the injustice characterised in paying political office holders who serve for just a few years, humongous sums as severance allowances while the miserly gratuities and pensions of hardworking civil servants who have spent 35 years or more years in the service of the country are hardly paid. He valiantly struck down the enabling legislation accordingly. My lord’s candour was vindicated recently when the apex court affirmed that decision early this year in *NWOKEDI V. ANAMBRA STATE & ANOR (2022) NWLR (PT. 1823).*

Chairman, National Council for Law Reporting of The Gambia.

Member – Chancery of the Republic of Gambia.

Director of Public Prosecutions, Ministry of Justice, Republic of The Gambia.

President, Court of Appeal of the Republic of the Gambia.

Chief Judge, Republic of the Gambia.

Judge of the Supreme Court of the Gambia.

Chief Justice of the Supreme Court, The Gambia

Chief Justice of the Supreme Court of Swaziland.