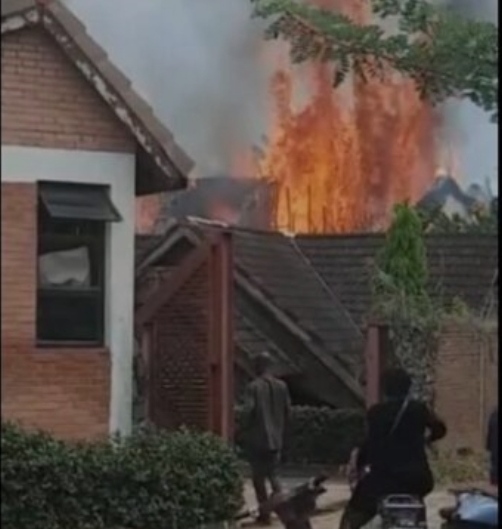 Gunmen have set ablaze an operational base of the Department of State Services (DSS) in Nnewi, Anambra state.

The gunmen were said to have invaded the area on Sunday in a sports utility vehicle (SUV).In a video of the incident the gunmen could be seen parading the building and later drove away from the scene. Reaching out to Ikenga Tochukwu, Anambra police command spokesperson, he said the only information at his disposal is a case of fire incidents in some parts of Nnewi.

Tochukwu said he has received further details about the buildings affected in the fire incident.“At about 2pm, yesterday, the command received a distress call of a fire incident in Nnewi. The police operatives are currently on ground there and the areas have been cordoned off,” he said.The house of Chu Okongwu, an economist and one-time minister of finance, was also set ablaze in the state.

Peter Afunanya, DSS spokesperson, has not responded to calls and text messages sent to his phone.The fire incidents are among the recent spate of violent attacks — killings and arson — in Anambra state and other parts of the south-east.On September 28, Chike Akunyili, husband to late Dora Akunyili, ex-minister of information and communication, was shot dead by gunmen at Umuoji, Idemili North LGA.On September 30, gunmen set ablaze Ajali divisional police headquarters in Orumba North LGA of the state, killing three police officers.