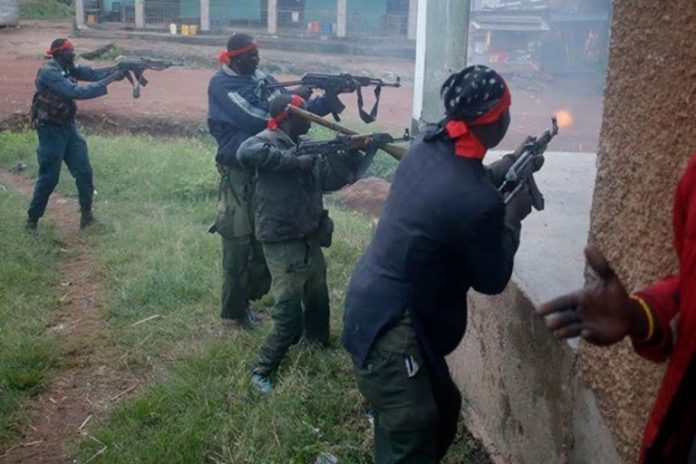 Some gunmen, Sunday night, invaded a hotel in Alomilaya area, Ganmo, in Ifelodun Local Government Area of Kwara State, killing the owner of the hotel identified as Kayode Akinyemi, and abducting his friend, known as Ori.

Our correspondent gathered in Ilorin, Monday, that the gunmen, who fired sporadic shots, also injured one Olushila Ojo, who was identified as the manager of the hotel during the operation.

It was further gathered that the gunmen, after invading the hotel named 16 Hour Hotel located in Alomilaya,  Ganmo, shot indiscriminately before abducting one man, identified as Ori, who was with the hotel owner during the operation.

“One of the friends of the owner of the hotel, one Ori ‘m’ who was with him on the day of the incident was abducted,” the statement said.

Okasanmi, who said the gunmen had disappeared into the bush before policemen arrived at the scene, stated that the injured manager of the hotel was taken to the General Hospital, Ilorin, where he was receiving treatment.

He said, “The Command’s tactical teams in conjunction with vigilante and hunters have since been mobilised to the scene to comb the surrounding bushes for possible rescue of the victim and arrest of the hoodlums.

“The Commissioner of Police, Kwara State, CP Tuesday, has declared a total lockdown of the area and a result-oriented manhunt for the perpetrators of the heinous act, adding that enough was enough for the criminals in the state.

The Police Commissioner said stringent security action was already in place to check the activities of the criminal elements in the state.

The PPRO said the corpse of the hotel owner, who was the victim of the invasion, had been deposited in the General Hospital mortuary for autopsy.

Anambra to commence implementation of anti-open grazing law in September