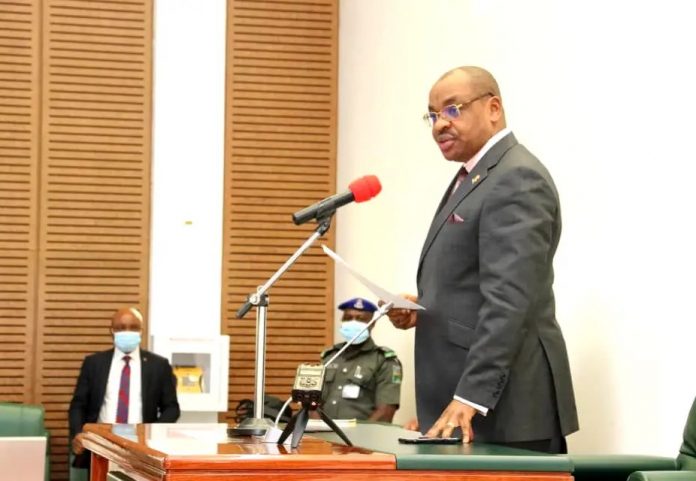 Princess Eme Ekong, 56, after being called to Bar in December 1990, has served in the Akwa Ibom State Judiciary and rose through the ranks to the position of Chief Magistrate 1, while Effiong Effiong FCIA, 48, last served as Chief Registrar in the State Judiciary, prior to the appointment.

Speaking after administering the oaths of allegiance and office, the Governor congratulated the newly sworn-in benchers and commended the contributions of the Judiciary to the functioning of the state government.The Governor sued for closer collaborations and harmonious relationship of the members of the judicial arm of government with the state executive while tasking the legal institution in the state to strive to give the state a good representation at the federal benches.

“While I congratulate the two judges, I’m happy we’re doing this before the end of 2021. I know the work is a whole lot, but as much as we can, let’s keep a good relationship. Let me thank you for how you’ve worked with us so far and I hope we gear up for even better collaboration in moving the state forward in 2022”, he said.Governor Emmanuel restated the commitment of his administration to boost justice delivery at all levels of the state judicial system which, he affirmed, informed his effort to ensure the swearing-in of the new Judges before the end of 2021.

In a related development, has urged members of the State Executive Council to work round the clock so as to see to the implementation of the government’s Completion Agenda.Speaking while assessing the State Exco on Thursday, Governor Emmanuel reiterated his charge to members to double their efforts in quality service delivery of all projects and policies under their care.

The State Executive Council frowned at the current spate of street trading within the metropolis, even on trunk A roads and the attendant risks and the ongoing defacing of the city caused by this menace and directed the Ministries of Environment & Solid Minerals and Transportation, Akwa Ibom State Environmental Protection and Waste Management Agency and Security Agencies to take immediate steps to curb the menace.Exco also received the presentation of WASSCE Result Performance Report from 2019-2021 from the Commissioner for Education, Mrs Idongesit Etiebet.The report showed that the total number of those who took the examination in the years under review were 54,171, 52,207 and 51,771 respectively.

The percentage of candidates who passed with credits in 5 subjects or more, including -English Language and Mathematics were 58.55(2019), 68.05(2020), 78.90(2021).The report was received and deliberated exhaustively and Exco was charged to improve the performance in future examinations.Also at Thursday’s State Executive Council meeting, the report of the status update on the Akwa Ibom Property and Investments Company was presented by the Managing Director, Barr. Patrick Udomfang, showing the current status of the company and suggests ways of repositioning the company for optimum performance.

Exco also deliberated and charged the company to take necessary steps to make the company run profitably with a directive that effective 2022, the company will have to generate resources to handle their liabilities and thus urged the Managing Director to reorganise the company for greater productivity.Exco also got a report from the Commissioner for Power and Petroleum Development on the update on the Power for all targets of the government. He reported that the state had attained 92 per cent coverage of all the gazetted villages, in addition to the network optimisation gains.