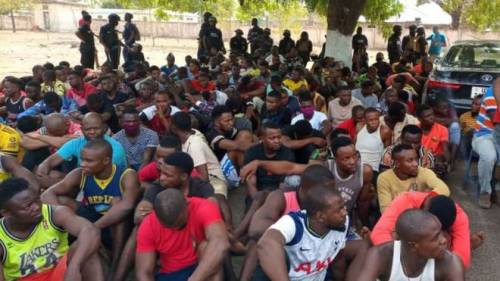 After illegally entering the country, 494 Nigerians were handed over to the Ghana Immigration Service for deportation.

Thirteen Burkinabe people who were among the foreign nationals detained by the Upper East Regional Police Command for unlawfully entering the country have also been deported.

The Regional Police Command’s spokesman, Assistant Superintendent of Police (ASP), David Fianko-Okyere, stated this in an interview with the Ghana News Agency in Bolgatanga.

According to a police spokesperson, the area has adopted a new strategy that includes a 24-hour robust patrol on highways and swoops, especially in Bolgatanga Township.

He claimed that the operation resulted in the detention of 507 foreigners from Burkina Faso and Nigeria in the Bolgatanga Municipality and its environs.

He said that, in addition to police intelligence, they had reports from the general population about the influx of foreign nationals into their societies.

According to him, locals blamed the increasing violence in the area on the suspected criminal activity of immigrants and a police swoop.

According to Fianko-Okyere, the 13 people from Burkina have already been handed over to the appropriate authorities in that region, while the others, suspected to be Nigerians, have been transported to the Immigration headquarters in Accra to be deported.

Apart from those detained, the PRO claimed that some Nigerians willingly handed themselves over to the police service in order to be deported back to Nigeria.