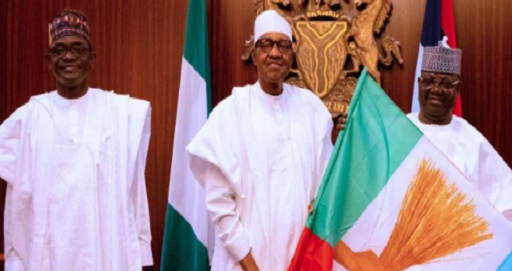 Speaking to journalists after meeting with the President, Senator Bwacha said he decided to pitch his tent with the ruling party because he was sure he would get a level playing ground there.He also noted the APC administration under Buhari has touched people of his senatorial district, meeting their age-long needs.

Asked why he chose APC, Bwacha said: “I chose the APC because I know from the home front that is where there will be a level playing ground, number one.

“Then number two, the Ibi Bridge, which had been awarded and work is ongoing, was awarded under President Muhammadu Buhari, nobody from my senatorial district is not happy about this project because this has been our cry since the colonial days.

“Also, under his watch, the Kashimbila Dam project had been completed. So, I had to answer to the calls of my constituents to join this party and redefine the narrative in Taraba State and restore its lost glory.

“Going forward, I am calling on all and sundry to join forces together so that we can build a better Taraba where governance will be seen as the hope of the people and where development of infrastructure will be a key priority.”

Buni said the party deemed it fit to deliver the new entrant into the party to the President, considering his status in the National Assembly.

Asked how the President received Bwacha, Buni said: “He was happy and delighted. You know, a ranking Senator like Senator Emmanuel Bwacha joining APC from Taraba, you know, it speaks for itself”.