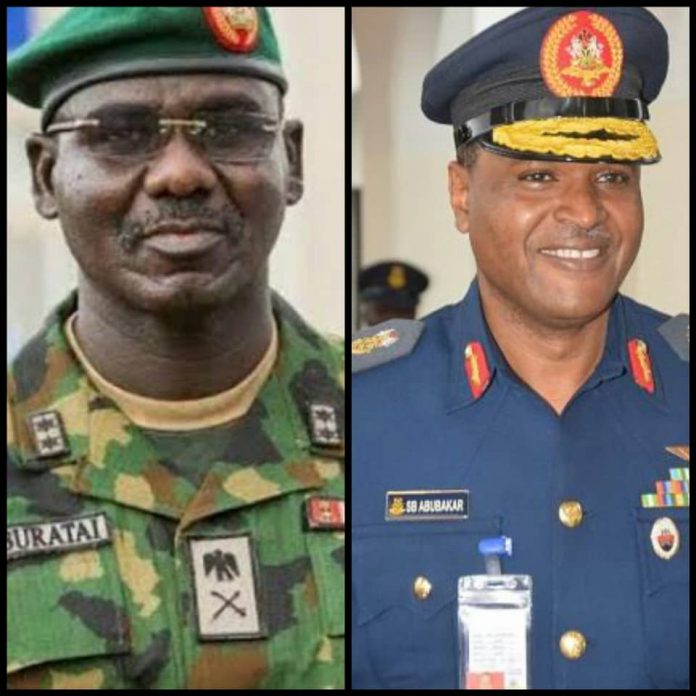 According to a civic group, the Africa Centre for Human Rights, an extensive investigation has been carried out on the two former military chiefs and the centre has gathered sufficient evidence in a 500-page document to indict the former service chiefs at the ICC in The Hague, Netherlands.

The five years, six months-tenure of Buratai and Abubakar was allegedly characterised by rights abuses and extrajudicial killings of Nigerians by soldiers.

Speaking for the African centre, Dr. Ifure Atafure catalogued on Tuesday the alleged atrocities under the two former service chiefs which would be tendered at the ICC.

In 2015, Buratai allegedly ordered the army to kill over 500 defenceless Shiites on the ground that they “touched a General’s chest.”
The incident which was tagged the ‘Zaria Massacre’ has further worsened the insecurity situation in the country.

He is also believed to have ordered the October 20, 2020 shooting of innocent civilians who were protesting at the Lekki Toll Gate and sanctioned the extrajudicial massacres in Oyigbo, an Igbo settlement in Rivers State.

The soldiers and officers involved in the killings were never prosecuted or punished, an indication the atrocities were committed with the approval of the army leadership, the group said.

Atafure said, “Meanwhile, civilian fatalities from airstrikes in conflict areas across Nigeria were a recurring dilemma under Abubakar. In April 2020, at least 17 people, mostly women and their children playing under mango trees were said to have been killed when a fighter jet belonging to the Nigerian Air Force ‘accidentally’ dropped a bomb on Sakotoku village in Damboa Local Government Area (LGA) of Borno State.

“In Sept. 2021, a dozen civilians in Buhari village in Yunusari Local Government Area of Yobe State were bombed by a military aircraft, and more than 20 other residents suffered different degrees of injuries.

“Two weeks after, 20 fishermen were killed when the Air Force targeted terrorist camps in Kwatar Daban Masara in the Lake Chad area. Ground troops were also victims of these ‘accidental’ bombings. In April 2021, some soldiers were killed after a fighter jet belonging to the Nigerian Air Force shelled a military truck in Mainok, Borno State.

“But just as ICC Chief Prosecutor, Fatou Bensouda, said last year that the court had received sufficient information to investigate the pair for alleged war crimes, they were confirmed as ambassadors.

“While Buratai was posted to the Benin Republic, the Senate confirmed Abubakar as the country’s Ambassador to Chad. Article 29 of the Vienna Convention protects diplomats from arrest and grants them immunity against civil and criminal prosecution.

“Diplomats must not be liable to any form of arrest or detention. They are immune from civil or criminal prosecution, though the sending country may waive this right under Article 32,” it states. However, after nearly a year, Abubakar in particular can be prosecuted after relinquishing his role to join partisan politics.

“He is the governorship candidate of the All Progressives Congress in Bauchi State for next year’s general elections. And the Africa Centre for Human Rights said it has compiled a 500-page document and will petition the ICC to resume its case of corruption, rights abuses and extrajudicial killings against the former CAS.”

Atafure added that Abubakar should be in jail in the first place and not rewarded for his crimes “in a sane society.”

He noted that the centre had been in touch with the ICC and the coming days, the retired Air Marshal would be invited and prosecuted.
Atafure said Abubakar must provide explanations for the multiple avoidable crashes under his watch despite billions invested in purchasing fighter jets.

“So far Abubakar has not accounted for all the crashes involving NAF jets under his watch. This is despite spending billions of naira for the procurement of training and fighter jets,” he said.

“It is on record that virtually all the aircraft that was purchased by the former Chief are not only poorly refurbished with record-breaking highly inflated prices but were technically risky and not safe to undergo the kind of pressure it underwent.

“While the nation and the aggrieved families of victims of corruption, official ineptitude and greed in the system continued to wait for a futile report of the crashes, there’s so far no hope that justice will ever be done to revisit the scandals in Abubakar’s tenure and how such practices caused the lives of very vibrant, intelligent and promising young officers and Nigerians as a whole while the nation also continued to lose billions of naira in allocation to fraudulent supplies,” he noted.

Quoting the forms of crimes against humanity listed in the Rome Statute, he said under Abubakar the NAF committed “murder, rape, imprisonment, enforced disappearances, enslavement – particularly of women and children, sexual slavery and torture.”