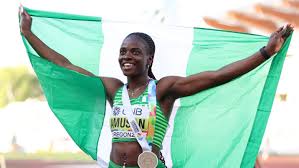 Hurdler Tobi Amusan became the first Nigerian athlete to win a World Athletics Championship gold as she stormed to victory in the women’s 100m hurdles in Oregon on Sunday.

Amusan, who had obliterated the world record in an astonishing semi-final where she clocked 12.12sec, powered over the line at Hayward Field in 12.06sec.

In this piece, The newswirelawandevents highlights other record-breaking feats from the 25-year-old World Champion.

World Championship
Preceding her emergence as the recipient of Nigeria’s first-ever World Championship gold, Amusan had produced a jaw-dropping world record in the semi-finals, smashing the previous best mark of 12.20secs held by Keni Harrison of the United States in 2016.

Amusan, who finished fourth three years ago at the World Championship in Doha, also became the second Nigerian sprint hurdler to win a medal at the Championships after Glory Alozie who won a silver medal in Seville, Spain in 1999.

Alozie ran 12.44secs in Monaco on August 8, 1998 to set a new African record, running the time two other times in Brussels 20 days later and at the World Championships on August 28, 1999 in Seville, Spain.