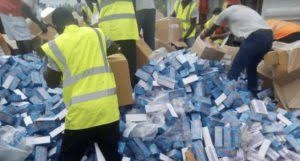 Five men on Tuesday appeared before a chief magistrates’ court in Badagry, Lagos State, for allegedly assaulting and obstructing National Agency for Food and Drug Administration and Control (NAFDAC) and Nigeria Police officials on duty.

The defendants, James Eze, 24; Ifeanyi Peter, 24; Uwaje Osakwe, 39; Nnamdi Eze, 21; and Nonso Obi, 34, of no fixed addresses, are facing a three-count charge of assault, obstructing and breach of peace.

The police prosecutor, Ikem Uko, told the court that the defendants committed the offences on December 13, at about 9:17 p.m., at Balogun Market, Trade Fair Complex, Lagos.

Mr Uko said the defendants assaulted, resisted and wilfully obstructed a NAFDAC officer, Hauwa Bello, and a police team attached to the agency who were on official assignment.

“The defendants attacked Bello by beating her with stones and bottles, which caused her harm while on the execution of her lawful duty.

“They also conducted themselves in a manner likely to cause a breach of the peace by attacking the NAFDAC officer and Police team,” he said.

According to the prosecutor, the offences contravene sections 174, 173 and 168 of the Criminal Law of Lagos State, 2015.

The defendants, however, pleaded not guilty to all the charges.

The chief magistrate, Patrick Adekomaiya, granted the defendants N300,000 bail each with two sureties in like sum.

He said one of the sureties must be a community leader while the other must be their boss, and adjourned the case for mention on February 27, 2023.