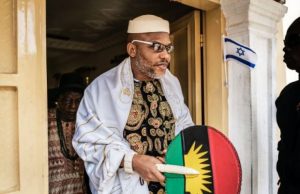 The Federal Government has accused the United Kingdom of doing little about the FG’s complaint that Biafra Radio was broadcasting from British territory, and also claimed the bulk of IPOB’s funding from its Diaspora supporters is sent through France. Information Minister Lai Mohammed, who stated this yesterday after the Federal Executive Council (FEC) meeting Abuja, added that IPOB leader Nnamdi Kanu’s belligerent attitude and the violence the group employed could not be overlooked by any government.  “It is an incontrovertible fact,’ the minister said, “that some people in the diaspora contribute money to IPOB … For instance, who does not know that the IPOB internal radio is located in London? We know the diplomatic moves we have been taking and approaching the UK, all the damage it has done; but they don’t see it that way. For them, it is about freedom of expression. If we have a person in Nigeria openly soliciting arms to … fight the UK, would you consider that freedom of expression? And this is a country that also has had a history; what did the Irish Republican Army (IRA) do to be labeled a terrorist organization? They were planting bombs, they were fighting the British army.”

Mohammed, who said Nigeria did not want a diplomatic row with either of the two nations, added it was within the rights of individuals or groups to seek self-determination, but in a non-violent manner.  He praised the prompt action of governors in the South-east and the North, without which, he said, there would have been a conflagration of immense proportions.” By their action, the minister said, the governors have cut off the oxygen that IPOB needs to survive.

He called IPOB a contraption being sponsored by the ‘Coalition of the Politically-Disgruntled and the Treasury Looters’ against the Buhari Administration. He quoted the title of a James Hadley Chase novel, The Guilty Are Afraid, saying it was a good thing that treasury-looters were agitated.

On Buhari’s approval of the IPOB proscription, Mohammed said there was a procedure for proscription, whereby the President signs the proclamation after which the Attorney General follows the procedure.