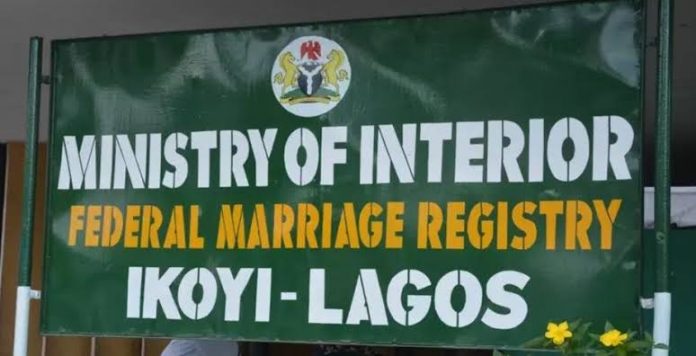 This was revealed at a national stakeholders’ conference on the administration and conduct of statutory marriage in Nigeria, which took place on Friday in Abuja.

The conference was called by Rauf Aregbesola, Minister of Interior, who was represented by Shuaib Belgore, Permanent Secretary, to notify stakeholders about some new guidance and important aspects of the administration and conduct of statutory marriage in the country.

The minister stated that the latest revised legal notices would bring an end to the lingering dispute between the ministry and local government marriage registrars by designating the federal capital’s local government areas and district development councils.

He said efforts are being made to have federal marriage registries in all the state capitals of the federation.

“The beauty of this arrangement is that it brings the services of this ministry, via the marriage registries, closer to the grassroots, thus reducing the need to travel relatively long distances to get married at a federal marriage registry,” Aregbesola said.

The minister also highlighted some of the new guidelines.

“The ministry of interior has the sole regulatory responsibility for the issuance of licences to public places of worship for the conduct of statutory marriages in Nigeria,” he said.

“Local government councils that have recently been designated as marriage districts may now nominate officers as local government registrars of marriage and must procure marriage certificate booklets from the ministry of interior.

“The printing and issuance of marriage certificate booklets to licensed places of worship and marriage registries is the sole responsibility of the principal registrar of marriages.

“The ministry of interior has the sole authority to issue the only valid and legally recognised certificate of marriage known as ‘Form E’.”

The permanent secretary added that the ministry has created an enforcement, inspection and investigation (EI&I) division whose function is to ensure that worship centres and marriage registries comply with the provisions of the marriage act.