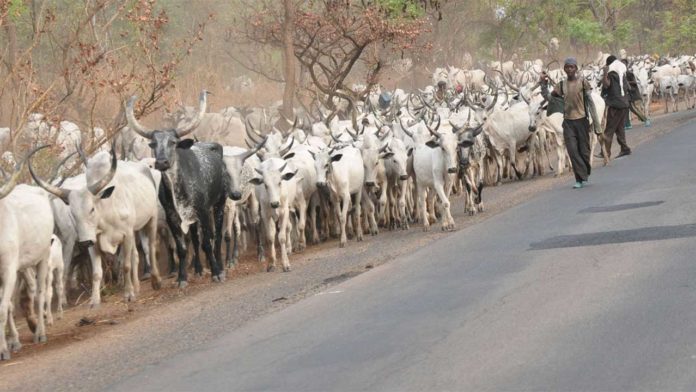 A Federal High Court sitting Abuja has given the Benue State Government the legal muscle to enforce its Open Grazing Prohibition and Ranching Establishment Law 2017.

According to Justice Ijeoma Ojukwu, the anti-grazing law, having been validly made by the state’s House of Assembly, and having not been invalidated by any competent court, remains a valid law, which is enforceable by the state, using all legitimate law enforcement agencies.

Ojukwu in a judgment read during virtual court proceedings on Thursday however declined to compel President Muhammadu Buhari to instruct security agencies to enforce the law.

The plaintiff, Matthew Tile Nyiutsa, a lawyer and indigene of Benue State, had sued Buhari, claiming that the President, by his oath of office, incurred a mandatory obligation to uphold and preserve the law of the land, but had failed to abide by his oath when he refused to implement the Benue State’s Open Grazing Prohibition and Ranching Law.

Nyiutsa added that despite the existence, herders have remained unrelenting in practicing open grazing, engaging in killings and destructions, but that the President has failed or refused to enforce the law in line with his oath of office by using the security and enforcement apparatus within his powers.

“In my view, the courts do not have the vires to entertain any suit bordering on compliance with the oath of office of the President for the reason that it is not justifiable.

“When the person, in this regard the President, fails to abide by the oath, the National Assembly, in line with the set down procedure, may consider it a misconduct in the performance of the functions of his office and take the appropriate measure under the Constitution. It is not the duty of this court adjudicate on.

“The plaintiff may have genuine concern in respect of the facts averred, but there are procedures set out by law to address issues concerning citizens’ rights and violations.”

Justice Ojukwu said the Benue anti-grazing law, having been validly made by the state’s House of Assembly, and having not been invalidated by any competent court, remains a valid law, which is enforceable by the state, using all legitimate law enforcement agencies.

She said: “There is no contest that the Open Grazing Prohibition and Ranching Establishment Law 2017 was validly passed by the Benue State House of Assembly and that the law is still in force, especially as the law has not been struck down by any court of law or court of competent jurisdiction.

“The implementation, therefore, lies with the machinery of the state and law enforcement agencies like the police, whose duty is to maintain law and order and to secure lives and properties in accordance with Section Four of the Police Act.

“It behooves the people of Benue State and law enforcement agencies, task force, etcetera to employ all legitimate means to implement that law.

“It is not the duty of the defendant on record. It is only where there is an infraction of the provision of that law that the court may be invited to impose the prescribed sanctions

“In so far as the President has not issued any Executive Order, which runs contrary to the said law, this court cannot hold him accountable.

“In the same vein, the court is not the appropriate arm to check any infraction in the performance of the functions of the office of the President arising from the oath of office taken by the President on the assumption of his duty as the President of the Federal Republic of Nigeria.

“That duty or obligation belongs to the National Assembly, through the process prescribed by the Constitution,” the judge said.

Justice Ojukwu equally held that by the provision of Section 308 of the Constitution, the plaintiff was wrong to have sued President Buhari in his personal capacity on an issue that relates to the performance of his official responsibilities.

“The immunity provided in Section 308 of the Constitution is to protect the occupier of the offices named in the section against the institution of either civil or criminal suit against him/her in the section from being sued in his personal capacity while in office.”

She said although the suit was in relation to the responsibility of the President in his official capacity, the plaintiff went outside that official capacity by adding the personal name of the name – Muhamadu Buhari – to the suit as a defendant.

“This cannot be the position of the law since governance is a continuum and does not terminate because the tenure of office of a particular office holder has elapsed.

Governors of the 17 southern states agreed at their recent meeting in Asaba, Delta State, to ban open grazing in their states.