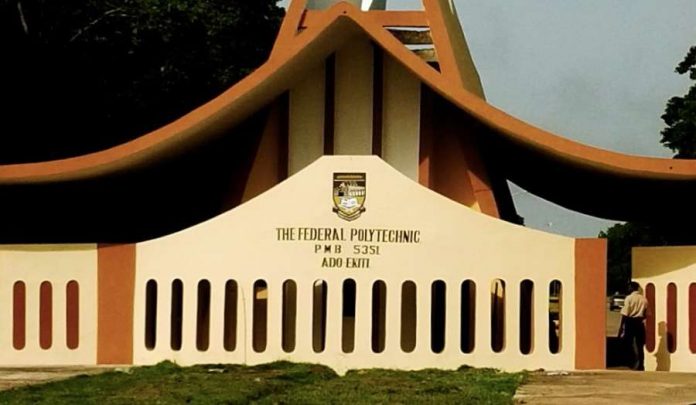 Rampaging students of the Federal Polytechnics Ado Ekiti, in Ekiti state, have set ablaze the institution’s health center after a protest that rocked the school on Saturday evening.

We learned that the action of the aggrieved students followed the sudden death of two of their colleagues at the school’s ill-equipped health clinic.

According to sources, the two students were both from the Department of Estate Management and died shortly they were administered some drugs at the clinic. One of the deceased, Oluwafemi Vincent was said to have been rushed down to the school clinic following complains of a severe headache.

Vincent, a final year student who was admitted to the sick bay was said to have given up the ghost after he was allegedly abandoned by the health workers at the clinic.

This, it was gathered, sparked an anger among the students who took laws into their hands to protest by razing down the school clinic.

One of the students who spoke on the condition of anonymity said the rampaging students set ablaze the clinic due to alleged negligence on the part of the clinic’s health workers which led to the death of two students.

“The students died due to negligence on the part of the health workers inside the clinic and we have been complaining about the lack of drugs in the health center.

“I think that was why the protesting students decided to go on a rampage by setting the clinic on fire, and some of us have already condemned that action.

“In fact, as I speak with you, the school authorities are not happy about this bad development and am aware a panel will be set up to unravel those who carry out this dastardly act,” he said.

All effort to get the reactions of the school management over the incident proved abortive.

Also, several phone contact made to the Public Relations Unit of the school was not connecting as at press time.

But a source in the management cadre said the students have been asked to vacate the hostels with an immediate effect while a panel will be set up.