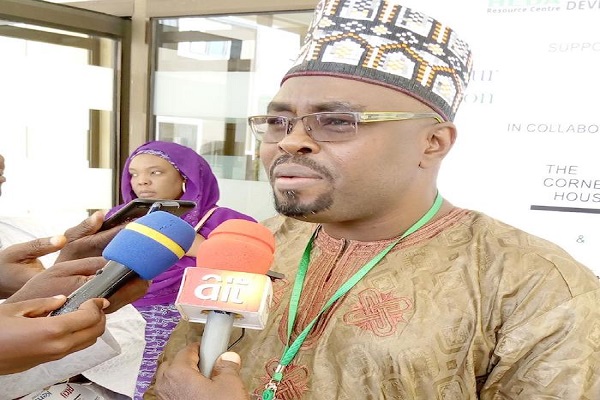 The Federal Government has initiated steps to prosecute activist, Olarenwaju Suraju, over alleged cyberstalking of a former Attorney General (AGF) and Minister of Justice, Mohammed Bello Adoke (SAN).The government in a suit marked FHC/ABJ/CS/370/2021 filed before the Federal High Court, Abuja, preferred four-count charges against Suraju who’s the chairman, Human and Environmental Development Agenda (HEDA) Resource Centre.The Nation reports that filing of the charges followed the forwarding of the investigation report by the Inspector General of Police (IG) Monitoring Unit to the AGF, Abubakar Malami (SAN) for legal advice and further action.

The police in February opened an investigation on the source of an alleged defamatory publication following a petition to the IG by Adoke.Through his lawyers, the former minister had requested thorough investigation with a view to unearthing those behind publication of emails purportedly of him and JP Morgan, the US investment bank, in June 2011 over OPL 245 transaction between Malabu Oil & Gas Ltd, Shell and Eni.

The publications had alleged that Adoke communicated the investment bank through the address of a company owned by Aliyu Abubakar, who was also on trial in Italy, in a bid to support the claim that he worked with Abubakar on a corrupt deal.

Adoke was also accused of having a phone conversation with an Italian journalist in 2017 where he was alleged to have acknowledged that the OPL245 deal was a scam.But at the end of police investigation, Suraju who used the social media platforms of HEDA to circulate the alleged email and voice note was accused of cyberstalking, injurious falsehood, criminal defamation, among others with the police recommending that he be prosecuted.In the suit signed by Lead Prosecution Counsel, A.O. Shaibu and sighted by our Correspondent, Suraju was specifically accused of using his organisation’s Twitter and Facebook platforms to circulate emails alleged to have been sent with the email address agroupproperties@yahoo.com owned by A Group Properties and received by a certain Osoluke Bayo O. with the email address bayo.o.osoluke@ipmorgan, which he “knew to be false” for the purpose of causing insult to Adoke.Shaibu also accused Suraju of using HEDA’s Twitter and Facebook sometime in 2018 platforms to intentionally circulate an audio interview alleged to have occurred between one Ms. Carlamaria Rumor, a reporter with RIA Reporter in Italy and Adoke, which he knew to be false in order to cause insults to the former minister.The alleged offences, Shaibu said, were contrary to and punishable under Section 24 of the Cybercrimes (Prohibition, Prevention ETC) Act 2015.

In the affidavit of completion of investigation in support of the charge dated October 8, a litigation clerk in the Ministry of Justice, Noma Wondo, deposed that a prima facie case was established against Suraju at the completion of investigation.Suraju has consistently denied any wrongdoing, insisting that his position on the matter corroborated the government’s stance in cases filed at London, United Kingdom and Milan, Italy.In an open letter to the AGF, HEDA through its Executive Secretary, Sulaimon Arigbabu, advised against the prosecution of Suraju on grounds that it would have considerable implications for both the JPMC case and the current appeal by the Federal Republic of Nigeria (FRN) in Milan against the judgment to acquit the defendants in the OPL245 case.