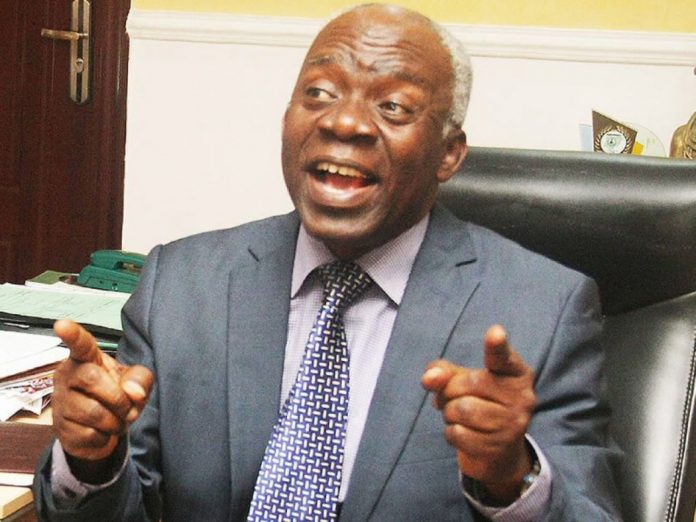 Human rights lawyer Femi Falana SAN has urged the leaders of the Economic Community of West African States (ECOWAS) to “take urgent and meaningful measures to improve the level of implementation of judgments of the ECOWAS Community Court of Justice to enhance access of victims to justice and effective remedies.”

Falana stated this in a paper presented at the International Conference on the theme: ECOWAS Court: Achievements, Challenges and Prospects hosted by the ECOWAS Court of Justice at Lome, Togo which held November  22 to 24, last year.

Falana said: “It is particularly worrisome to note that some of the member states that appointed competent national authority for the purpose of receipt and processing of the execution of judgments of the court have been accused of not complying with decisions of the court.”

According to him, “It is common knowledge that the rate of compliance with the judgments of the court is embarrassingly low.”The paper titled: Twenty Years of ECOWAS Court of Justice: Achievements, Challenges And Prospects ding on the Member States, read in part: “Under ECOWAS Court protocols, the Member States shall determine the competent national authority for the purpose of receipt and processing of execution of the decisions of the Court and notify the Court accordingly.

“So far, only six member states namely Burkina Faso, Guinea, Nigeria, Mali, Togo and Ghana have appointed the national authority for the enforcement of the decisions of the Court.“No doubt, the future of the Court is bright. There is however the fear that the Court may lose its relevance if its judgments are continuously treated with disdain by the member states of the ECOWAS.

“The challenge can be seriously tackled with the establishment of the appellate division of the Court and the domestication of the Protocol on the Court by the parliaments of the member states of the ECOWAS.

“Out of the total of 446 cases lodged with the ECOWAS Court of Justice since its establishment 20 years ago, 233 judgments, 117 rulings and 30 interim orders were delivered during the period.

“The Court faces an ‘existential threat’ by the twin problems of the reduction in the number of the judges from seven to five and their tenure from five years renewable to four years non-renewable instead of the former practice of a staggered tenure.

“Even the ECOWAS Commission has lamented the disrespect of the decisions of the Court by member states. But no concrete measures have been adopted by the Commission to ensure compliance with the judgments of the Court.

“However, it is submitted that even though Cape Verde did not sign the Supplementary Protocol, it is bound by the judgment of the Court under the doctrine of estoppel.

“Apart from the fact that Cape Verde took part in the drafting of the Supplementary Protocol in the meetings of the Council of Ministers and approval of same in the Summit of the Heads of State and Government of the member states, the Republic submitted to the jurisdiction of the ECOWAS Court in the case of Alex Saab.

“Indeed, Cape Verde further submitted to the jurisdiction of the Court by filling two separate applications praying the Court to set the judgment aside on ground of lack of jurisdiction. It is hoped that ECOWAS leaders will address the defiance of Cape Verde to avoid setting a dangerous precedent in the community.”

Falana urged Heads of Government of the member states of the ECOWAS to realise that “they may have cause to approach the Court for the protection of their threatened or abused human rights when they are out of office. He urged them to draw lessons from the experience of ex-presidents Mamoudu Tandja of Niger, Laurent Gbagbo of Cote divoire, Yaya Boni of Benin,  Charles Taylor of Liberia and Blaise Campaore of Burkina. These leaders were compelled to seek legal redress in the court even though they had treated the decisions of the Court with disdain when they were in power.

“As the jurisdiction of the Court was limited to the resolution of disputes between the institutions and member states of the ECOWAS inter se, the two cases filed by individual community citizens were struck out for want of locus standi.

“As the Court was becoming re    dundant a campaign was launched by the management of the Court and concerned civil society organisations for the expansion of the mandate of the Court to entertain cases of human rights violations.

“Unlike municipal courts in the member states of the ECOWAS which usually restrict the observance of human rights to political and civil rights, the ECOWAS Court upholds the socio-economic and solidarity rights of community citizens including the right to environment and development.

“In the Registered Trustees of the Socio Economic and Accountability Project (SERAP) v. Federal Republic of Nigeria the Court held that every Nigerian has a right to education in line with Article 17 of the African Charter on Human and Peoples Rights.”

“In SERAP v Nigeria the Court of Justice held that the Nigerian government was responsible for the abuse of the environment traceable to the oil companies operating in the Niger Delta region, in violation of Article 24 of the African Charter of Human and Peoples’ Rights.

“It is our submission that the judgments handed down by the Court in many cases have contributed to the rich human rights jurisprudence in Africa.