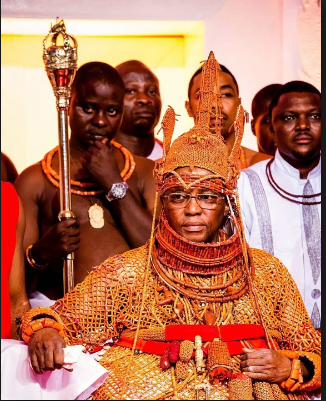 Gov. Godwin Obaseki of Edo state has said that the relationship between the state government and the Benin Monarch, Omo N’ Oba N’ Edo, Uku Akpolokpolo, Oba Ewuare II, in the last one year, has improved the quality of life in the state.

Meanwhile, the Oba of Lagos, Rilwan Akiolu, has said that the developmental strides being witnessed in Lagos State was because of the blessings given to the state by a past Oba of Benin.

Saying that Lagos state has continued to enjoy that blessing. Oba Akiolu said he was happy to be present at the anniversary of an Oba ‘who used to be his brother but is now his father.’

Also, immediate past governor of Edo state, Comrade Adams Oshiomhole who congratulated Oba Ewuare 11 for his one year coronation anniversary and birthday, described the Oba as a bridge builder and a blessing to Edo state and Nigeria as a whole.

Both Governor Obaseki and Oba Akiolu spoke at a Gala Night to mark the one-year coronation anniversary of Oba Ewuare II, in Benin City, Friday.

The governor described his working relationship with the monarch in the one year he has reigned as inspirational and unique, noting that the cordial relationship has been instrumental to the successes recorded by his government in the last one year.

Obaseki said that the collaboration has helped the government in addressing some of the concerns raised in His Majesty’s coronation speech last year, which resulted in the state government’s new law which outlawed the activities of Community Development Associations (CDAs) as well as the development of the Gelegele Seaport.

“We as a government have collaborated with his Majesty and have put a law in place to deal with miscreants, who still engage in CDA activities in the state. For the Gelegele Seaport, we set up a technical committee on the development of the seaport and the committee has submitted its report to us,” the governor said.”

He congratulated Oba Ewuare II on his birthday and one-year anniversary on the throne and thanked him for being a source of confidence to those in public office by his actions.

Obaseki said that the state would be hosting the Alaghodaro Investment Summit in Benin City in November to open the state for investment to secure the future of Edo people, adding, “In less than a month from now the first edition of Alaghodaro Investment Summit will hold in this great city. Our objective is to showcase sectors that global business players can invest in, namely, agriculture, energy, manufacturing, tourism, real estate and sports to mention a few.”

On his part, Oba Ewuare II urged traditional institutions to partner with government for the good of the society, declaring that he will soon embark on national and international tours and hopes to use the opportunity to build stronger ties that will benefit Edo.

Oba Ewuare II thanked the state government for acceding to his request that CDA activities be criminalised in the state, noting that the new law has brought sanity to property management in the state.

The event attracted dignitaries from within and outside the shores of the country and was spiced with musical performances by Nigerian artistes namely, Tu face Idibia, Davido and Majek Fashek.