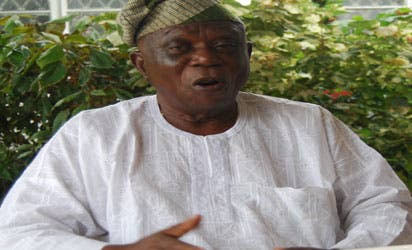 A former President of the Nigerian Bar Association (NBA), Chief Babatunde Olusola Benson, is dead.
Chief Benson, who held the traditional title of Asiwaju of Ikorodu, died on Thursday, nine days to his 89th birthday on July 4, 2021.

His death was announced by Ayangburen of Ikorodu, Oba Kabir Shotobi, and Ikorodu Branch of the NBA

Benson was born in Ikorodu to the famous Benson family on July 4, 1932.

He was called to the English bar in 1959. His enrollment number in Nigeria’s Supreme Court as Solicitor and Advocate was 38.

On his return to Nigeria, he joined the law firm of his uncle, TOS Benson, SAN, where he eventually rose to the position of the Head of Chambers.

He was also subsequently elected Vice Chairman of the Commonwealth Lawyers Association.

He suggested the idea of an association of African lawyers under the aegis of African Bar Association (ABA) and subsequently emerged its President between 1978 and 1980.

He was the first and only Nigerian to serve in the capacities of General Secretary and NBA President.

Benson was conferred with the prestigious rank of Senior Advocate of Nigeria in 1983.

In his statement, Oba Shotobi thanked God for the life of the deceased.

“Life of committed service to development of Ikorodu Kingdom and to humanity. May God forgive his sins and admit his soul into eternal rest,” the monarch said.

He said the burial arrangement will be announced later.

In its announcement, by its Branch Secretary, Seun Aka, NBA Imorodu said: “The branch hereby announces the passing away of our life patron Chief Babatunde Olusola Benson SAN KJW.

“Baba, as he is fondly called, passed on to the great beyond few hours ago while the branch is rounding off preparation for the annual B.O Benson lecture scheduled to hold on the 1st of July 2021.

“The branch prays for the repose of his soul and that the family as well as the branch be granted the fortitude to bear this irreparable loss.

“All programmes for the law week will hold as earlier scheduled. The branch will always celebrate Chief B.O. Benson even in death.

“He also holds honorary Doctor of Law, LLD of the Lagos State University (LASU) where he was legal adviser for many years.”