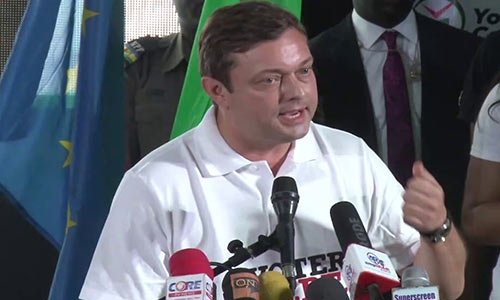 The European Union (EU) has urged Nigeria’s government to look past military deployment in the current fight against terrorism in the country’s north-east and other crises triggering instability in the country.

Addressing a media briefing ahead of Europe Day 2021, Ambassador Ketil Karlsen, Head of the EU Delegation to Nigeria and the Economic Community of West African States (ECOWAS), said the country’s instability crises have shown that, although the military solution should not be ruled out, other alternatives, such as dialogue and other legal instruments, should be created.

He said by advocating the introduction of dialogue and other strategies, the EU is not promoting that terrorists should not be punished for acts of terrorism but rather that all options should be brought to bear.

Karlsen reaffirmed the commitment of EU to a strong and robust mutually beneficial partnership with Nigeria, and declared its continued support for the country in addressing challenges and seeking opportunities.

He said the EU-Nigeria partnership had never been stronger and more relevant, even in the face of recent upheavals arising from the COVID-19 pandemic, while hailing the resilient spirit of what he described as “a long-standing partnership of equals.

He noted that the EU bloc of 27 member states remains Nigeria’s biggest trading partner, first investor, a top donor of humanitarian and development aid, and the biggest diplomatic network.

Karlsen cited the outstanding strides made in recent times as the EU and Nigeria collaborated to address issues of common concerns, leveraging of their wide and deep partnership.

He said: “This year also, we are commemorating 10 years of EU Diplomacy. The European External Service was created a decade ago, getting the EU diplomacy ready for the challenges of the 21st century.

“In the face of big challenges such as pandemics, security, finding green and digital solutions, climate change and migration, we have already proven to be more effective together.”

He noted that the EU has within these 10 eventful years contributed in promoting peace and security, democratic governance and rule of law, human rights and freedoms, prosperity and decent living at home and around the world.

He said multiple examples of EU engagement in Nigeria include working with the Nigerian authorities to bring an end to the security challenges across the country.

According to him, “We are supporting government’s efforts to fight terrorism, radicalization and violent extremism as well as the reform of the criminal justice system.

According to him, “We are supporting government’s efforts to fight terrorism, radicalization and violent extremism as well as the reform of the criminal justice system.

“Since Nigeria’s return to democracy in 1999, the EU has supported its democratic process with over €100 million. The EU has consistently deployed an Election Observation Mission (EU-EOM) in each of the general elections. EU’s support aims to strengthen key democratic institutions including INEC, the National Assembly, the civil society and the media.”

Karlsen, while noting that over 60 per cent of Nigeria’s population is under 25 years, said the ability to provide opportunities for young Nigerians will be a strong factor in the country’s political, economic and social development.

He said: “The youths have, therefore, been a central feature of EU’s support across all priority areas. In 2020, the EU doubled the number of young Nigerians selected to study in various European universities under its flagship education programme, ERASMUS+.”

He stated that while the EU takes the lead in promoting human rights and freedoms, Nigeria is one of the pilot countries for the EU-UN Global Spotlight Initiative, a multi-year joint effort to eliminate all forms of violence against women and girls by 2030 with an initial investment in the order of €25 million made to Nigeria.

He said although the global economic downturn precipitated by the COVID-19 led to a decline in the volume of EU-Nigeria trade, the EU remains Nigeria’s largest trading partner accounting for 20.4 per cent of Nigeria’s trade with the world in 2020.

He announced that the EU is leading the way in assisting partner countries, including Nigeria, in combating the COVID-19 pandemic by pooling money from the EU, its member states, and European financial institutions through the ‘Team Europe’ initiative.

When the pandemic in Nigeria began, the EU quickly mobilized €50 million to assist the country’s national response to the crisis.
Furthermore, a humanitarian assistance grant of over €9 million was granted to Nigeria in order to improve the country’s coronavirus prevention and response.

The UK Parliament is Concerned about Nigeria’s Growing Insecurity.