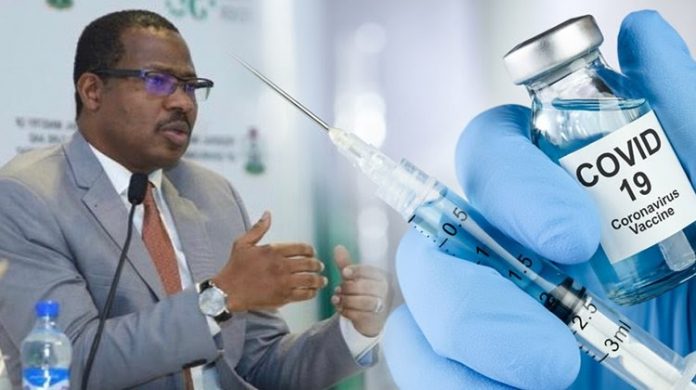 The National Primary Healthcare Development Agency has urged state governments to step up mass vaccination against COVID-19 as part of moves to combat the virus.

The agency, in its latest advisory obtained by one of our correspondents in Abuja, also urged state governors to enact and enforce vaccination mandate for local and state government workers.This came to fore as the percentage for fully vaccinated Nigerians stalled at 4.2 per cent while those that had taken their first dose remained grounded at 9.8 per cent as of Sunday, January 9, 2021.

The NCDC in its daily updates continued to report increase in the number of fatalities reporting no fewer than 38 deaths between January 1 and January 8.Despite the increasing number of cases and deaths, some states have not vaccinated up to 200,000 individuals while Abia, Kogi and Niger states have not commenced administration of booster shots.

While some states had commenced the booster administration, analysis by our correspondent revealed that Akwa-Ibom, Anambra, Benue, Ebonyi, Imo, Kwara, Sokoto and Yobe had yet to administer boosters up to 100 residents. While Imo had only administered ten booster shots, Ebonyi administered 52, Akwa Ibom administered 67 among others.

NPHCDA urges states to set up mass vaccination sites in markets, others

But the NPHCDA in its bid to speed up vaccination, in its advisory told governors that it was part of their responsibility to enact and to enforce vaccine mandate on state and local government workers.The Secretary to the Government of the Federation, Boss Mustapha had in October announced that Federal Government workers who failed to show proofs of vaccination would be barred from government offices.

The Executive Director of the NPHCDA, Dr Faisal Shauib had another press briefing in 2021 had said that individuals who refused to get vaccinated would not be allowed to infect other people.The Presidential Steering Committee went ahead to issue a vaccination mandate to Federal civil servants. The Boss Mustapha-led Committee had stated that Federal Civil servants without proof of vaccination and negative PCR tests would not be allowed into their respective offices as of December 1, 2021.

The federal civil servants who refused to adhere to the mandate were turned back home while others had to visit makeshift vaccination sites to get vaccinated.

State governments of Kaduna and Ondo states had also enforced vaccine mandate on state workers. But in a fresh advisory sighted by our correspondent, the NPHCDA advised governors to enact and enforce the same vaccination mandate on state and local government workers.The advisory partly reads, “Enact and enforce vaccine mandate for all state and local government workers, direct mandatory set up of mass vaccination sites in public places including markets, parks, event centres, stadia and academic institutions.

Approve and direct the release of state counterpart funds for advocacy, communication and social mobilization, logistics and additional teams in quarterly tranches.“Pay weekly unscheduled visits to at least one mass vaccination site to supervise and motivate the vaccination teams, chair weekly review meetings with traditional and religious leaders to address vaccination gaps.

But the Senior Special Assistant to the FCT minister, Dr. Ejike Orji said that the final decision to enforce the vaccine mandate lay on the minister.He said, “Well the vaccine mandate is a Federal Government policy and it is expected that each state will start the process. A lot of people think we are trying to force it but what the government is saying is that if you have a right to not get vaccinated, other people also have rights to not getting the virus from you.“Sooner or later, the FCT will give the instruction. it is the mandate of the minister to do so and he will decide when to fully enforce it.”

In a related development, the Ekiti State Chief Judge, Justice John Adeyeye, has taken delivery of equipment to facilitate virtual court sittings, saying that he has issued a practice direction which includes among others use of appropriate technology for timely and effective disposal of cases.The CJ, who spoke in Ado Ekiti while receiving laptops and printers from the state government for the commencement of virtual sessions in the courts, said that the new Practice Direction had been available for use by stakeholders in courts of the state since January 4.

Adeyeye said the objectives of the Practice Direction included “timely and efficient disposal of cases, use of suitable technology, just determination of proceedings, efficient use of available judicial and administrative resources among others.”“Other aspects of the Practice Direction shall involve service of processes electronically, preparation for remote hearing, conduct of remote hearing, recording, adoption of written addresses, notice of delivery of judgments and rulings.

“The Practice Direction is pursuant to Section 274 of the Constitution of the Federal Republic of Nigeria, 1999 (as Amended), Order 45 of the High Court of Ekiti State (Civil Procedure) Rules 2020, Section 354 (1) of the Administration of Criminal Justice Law of Ekiti State, 2014 and any other enabling legislations,” he said.

Accordingly, the Practice Direction shall apply to cases involving urgent or time-bound Interlocutory applications, fundamental human rights, where the applicant is in custody and other matters as the chief judge may approve.The State Attorney General and Commissioner for Justice, Wale Fapohunda (SAN), who presented the items to the CJ on behalf of the state government, said, “The equipment will serve as veritable tools in handling the virtual court sittings.”