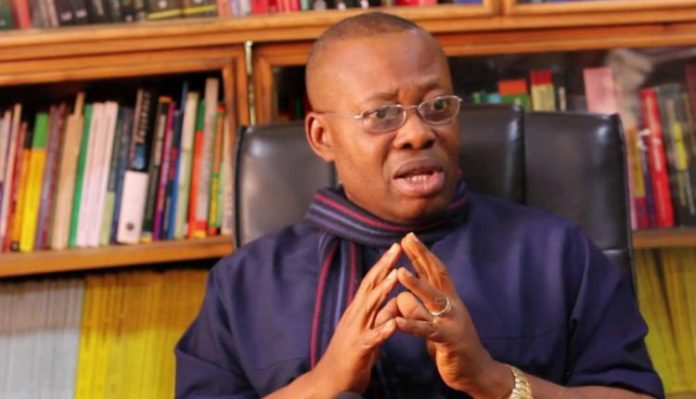 LAGOS – Monday Ubani, chairman Nigeria Bar Association, Section on Public Interest and Development  Law (NBA-SPIDEL) has said that it is shameful for the federal government to call a press conference over a report which the Lagos State government is yet to release a white paper on.

The former second vice president of the NBA in a chat with Daily Independent said that it was obvious that the Minister of information and Culture, Lai Mohammed knows that he is only trying to clear his name.

He said, Lai Mohammed’s image was damaged by that report. The report has put a ly to everything he said. It is obvious from their action that they are not ready to implement anything. The report in circulation has indicted the Lagos State government and the federal government security agencies for killing Nigerians at the Lekki Tollgate. Whatever narrative that they want to come up with, is immaterial because the narrative that Nigerians believe is that people died at the Lekki Tollgate, and whatever happens they cannot change that.

“No matter the white washing and intimidation they can never kill the truth. The truth is that people died at the Lekki Tollgate and the panel has said so,” he said.While blaming the federal government for its action, Ubani said, “It is very shameful for Lai Mohammed to call a press conference over a report that the Lagos State government has not done any white paper on. What is in circulation may not be an official document until the Lagos State government acknowledges that it is an official document. President Buhari has said during his meeting with the United States secretary of state, Antony Blinken that he is waiting for the performance of the Lagos State government in regard to the EndSARS panel of I inquiry report.

“Why can’t Lai Mohammed wait for the white paper from the  Lagos State government? The report has not been made public officially  but what is in circulation at the moment may not be an official document.  Why is he in a hurry? He expected a report that would say that there were no killings at the Lekki Tollgate and that is the report that would have satisfied his appetite.”

Ubani added  “Since the panel gave a report that is contrary to his expectation and what he desired, he is claiming that the report is wrong. We are telling them that the report is a true reflection of what happened at the Lekki Tollgate. It is premature for him to want to tell the Lagos State government what it should do.  There was no sincere intention on their part to set up the panel. We knew it was all a farce. From the begging when they set up the panel they wanted  it to do what they wanted   but now that they have given an accurate account of what happened, they are now running helter skelter.”

Meanwhile the lawyer said that it is wrong for any one to have resorted to singling out Ebun Adegboruwa (SAN) for intimation stressing that the government appointed Adegoruwa and he gave a sincere account of what happened.

He said, “If the government didnt want a fair report of what happened at the Tollgate it would have appointed the lawyers from their ministry. You appointed the man and he lived up to expectation. It is wrong for anyone to resort to threatening Adegoruwa or even any of the witnesses because we saw a video of a witness who was injured. That is barbaric. The government must get all those who were responsible for that act and prosecute them.”It will be recalled that the federal government through the Information and Culture Minister, Lai Mohammed discredited the EndSARS panel report stressing that it is not a true account of what happened at the Lekki Tollgate but a recycled fake news.