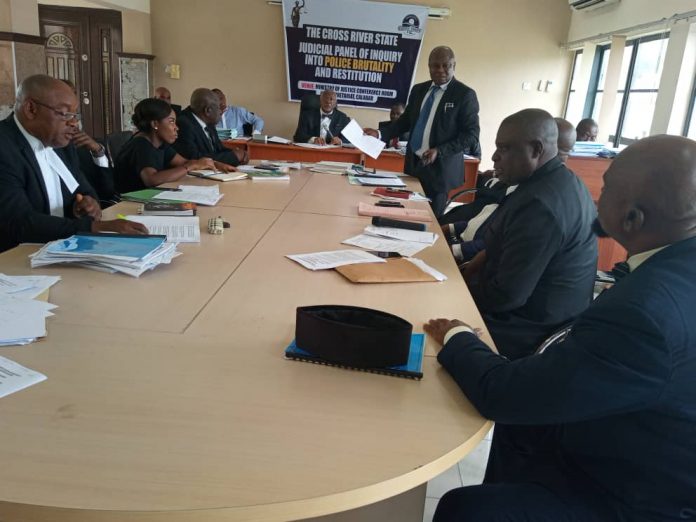 The Cross River State Judicial Panel on police brutality earlier today (Tuesday), at 11:05am arose for its judicial activities, on announcement of counsel’s appearance to the petitioners and respondent’s, the leading counsel to the police legal team Denis Esq., objected and pleaded for discontinuation of the panel sitting. Mr. Denis Esq. however stated the fatal incidents which happen on Thursday afternoon at the police headquarters Cross River State which has lead him to is adjournment of today’s activities.

Dennis Esq. informed the panel of is inability to proceed in today’s sitting due to the ongoing events at the police headquarters Calabar which courtesy demand is presence as early as 12 noon.

Dennis however pleaded with the panel to consider is appeals so as to give all maximum respect and humility to the loss of the Late Commissioner of Police, Abudukadir Olanrewaju Jimoh

The police legal team’s as well outline the fact that the death of their boss “Jimoh” as cause much loss emotionally and psychology to the police units and the legal department of police in Cross River State, which as well hinder is emotional preparedness of today’s activities.

Mr Dennis Esq. who hastily intercepted the objection raised by the petitioner’s counsel over several adjournments and the nonchalant attitude of the defendants handling the case’s brought before them at the panel continued by stating to the judicial panel that this is a matter of life and death, a matter of urgency

He recounts to the panel the disadvantages and damages that might occur if the panel decline is appeal and proceed with the activities of the day.

Dennis Esq. as well lead the panel scripturally by stating how “Mary mourned get discomforted over the death of Jesus an follow the rest disciples in giving acknowledgement to is only son”.

Justice Edem however admitted the appeals and the loss of the Police superior in cross river state, adjourned the panel sitting till 22nd December 2020, the learned judge however informed the police legal team’s to get fully prepared emotionally and psychological beforehand and let the dead bury the dead.