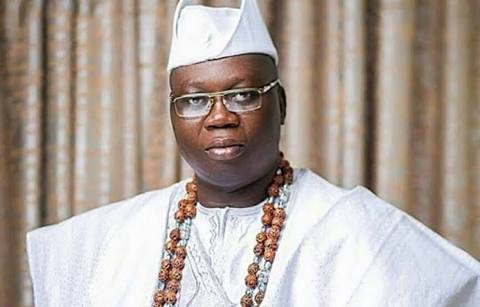 Aare Ona Kakanfo of Yorubaland, Iba Gani Adams, has asked President Muhammadu Buhari not to use soldiers to forcefully stop the #EndSARS protests that have gripped more than 20 states in the country.

Iba Adams made the plea in a letter despatched to the president on Sunday, urging him instead to enter into constructive dialogue with the protesters.

Aare Ona Kakanfo, while offering the counsel, said he could not imagine soldiers being sent to stop street protests, declaring that they were programmed to fight external aggression and to deal with peaceful protesters.

He warned against giving the wrong impression that Nigeria was at war with her citizens, saying the Buhari government must do everything to promote and defend democratic culture.

“I can’t imagine soldiers being sent to stop protests. Soldiers are to fight external aggression. We are dealing with peaceful protesters. It is wrong to give the impression that Nigeria is at war with its citizens. We must do everything to promote and defend democratic culture,” Iba Gani Adams said

Adams also urged the protesters to ensure the process was not hijacked by violent and recalcitrant people, just as he condemned violence in all forms as well as the murder of some protesters by some security operatives.

“I condemn violence in all forms. I strongly condemn the actions of some security operatives that murdered the protesters. The list available to me shows 20 people have been killed across the country.

Adams said using soldiers to quell protests by civilians had already been declared illegal by a Federal High Court in July 2020, reminding President Buhari that protests had hit many countries of the world this year and none had resorted to using soldiers to suppress the protesters

Adams, in the letter, berated the incidence of violence linked to some protesters in some states of the Federation, describing such as uncalled for, while observing that the protests had been largely peaceful across the country.

“It also questions the quality of those behind the protests. On the other hand, adoption of a violent response by the state should never be considered an option,” he argued.

On the attack on the Osun State governor, Mr Adegboyega Oyetola, by some thugs in the state capital, Osogbo, where he came to address peaceful protesters, Iba Adams described the incidence as distasteful, saying it was also unfortunate that it led to avoidable deaths.

According to him, the killings and violence are ill winds for the South West and the country, warning that such attacks might be explored by political interests to plunge the South-West into a state of emergency.

Adams, however, urged President Buhari to see the protests as a form of resistance against systemic failure, corruption, economic and political exclusion and above all incompetence at all levels.

He further urged him to initiate the process for the transformation of the police force to an organ-driven by public interest, saying the outfit should not just be reformed.

He added that this was the time him to work with the National Assembly to establish state and community policing system in line with the fundamental principles of Federalism, declaring that he had a golden opportunity to do such now and save the country from what he termed “the potential of horrendous evil of a garrison state.”

“The police should not just be reformed, it should be transformed. This is the time for you to work with the National Assembly to establish a state and community policing system in line with the fundamental principles of Federalism. You have a golden opportunity to do this. Go ahead and take the bull by the horn and save Nigerian from the potential of horrendous evil of a garrison state,” Adams said.