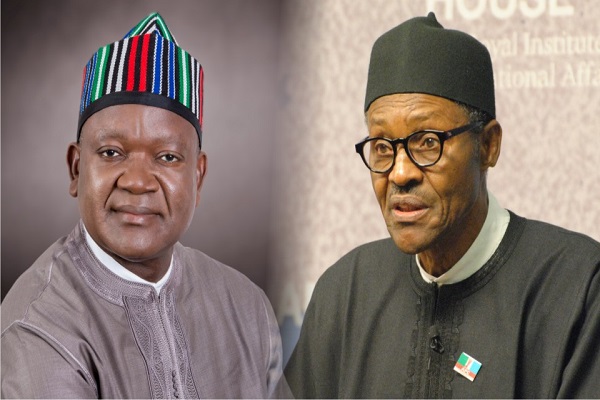 Governor Samuel Ortom of Benue State, has commended President Muhammadu Buhari’s decision to decline assent to the amended Electoral Act over the inclusion of mandatory direct primaries by political parties in the Act, saying his decision is in the best interest of the country.

The Governor who also lauded members of the National Assembly for the provision of electronic transmission of election results in the Act, appealed to the lawmakers to quickly act on the concern of the President by expunging the sections that provided for mandatory direct primaries and allow political parties adopt the type of primaries that suit them.

The Governor who spoke on Tuesday in Makurdi while reacting to the decision of the President to return the piece of legislation to the National Assembly for review, said the reasons advanced by the President to support his decision to withhold his assent should be appreciated by all.

He said: “I must also commend President Muhammadu Buhari for withholding assent based on the process of primaries of the various political parties; and his appeal to the National Assembly to reconsider the clause that allow only direct primaries.

All the reasons that the President advanced to support his decision to withhold his assent are deeply appreciated. I can assure you that as a veteran politician who had the privilege of witnessing direct and indirect primaries in various parties and also witnessed consensus arrangements, the President’s decision is best for this country.“It was almost a unanimous position by the political parties that the issue of primaries should be the responsibility of the political parties as enshrined in their various constitutions.

So I commend the President Buhari for listening to us, because you can recall that I was one of the first people that advised the President to withhold his assent and also appealed to the National Assembly to reconsider that clause.”

The Governor also commended Nigerians including organizations whose views were sought on the matter by the President saying his decision would further deepen democracy in the country as smaller political parties will still be relevant in the polity.

He said, “I must also particularly appreciate the National Assembly for listening to the cry of our people to include the electronic transfer of election results in the amended Electoral Act. It will further strengthen the system and deepen democracy and usher in a transparent, free and fair election in the country.”Governor Ortom appealed to the President to adopt the same strategy of consulting with Nigerians to address the nagging security and economic challenges facing the country.

He should listed to the larger Nigerians, their thoughts, their feelings, their views with the aim of coming out with a common position that will be accepted and can help the security architecture of our country and our economy because without security there can be no economic development or improvement.

“I know that there are many experienced Nigerians with the capacity, views and knowledge to help this country. But until an enabling environment is provided in the same manner that the President handled the Electoral Act issue by asking for views we may not make progress.”The stated that he would not hesitate to commend the President, the federal government and the National Assembly and anyone with patriotic views that would make things work in the country.

“But where I feel that things are going wrong I will not also keep quiet. I will continue to talk on the ills, on the injustice, on the unfairness and inequity; I will not keep my lips shut. The only thing that will make me keep silent is when we are able to get it right or justify why we are doing those wrongs things that people should not say anything about.”