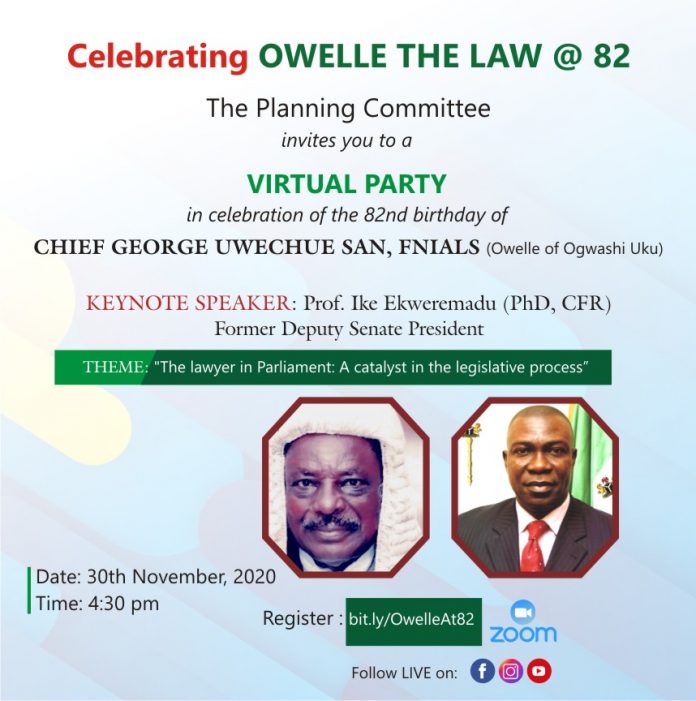 The event which is aimed to honour Chief Uwechue, a former Speaker pro Tempore of Nigeria’s House of Representatives, has as its theme “The lawyer in Parliament: A catalyst in the legislative process.” The birthday lecture is billed as a tour de force between politics, lawyering and lawmaking. Chief Uwechue was the Deputy Leader of the Nigeria Peoples Party (NPP) Caucus and Chairman of the Public Petitions Committee.

A statement by the Chairman of the Planning Committee, Chief Emeka Ngige, SAN noted that “As Owelle was a lawyer-member of the House of Representatives in the Second Republic, we consider the topic apposite for the occasion, moreso as Senator Ekweremadu is not only the immediate past Deputy Senate President but is also a lawyer and has been in the Senate for unbroken 17 years.”

The event which kicks off at 4:30 pm will be chaired by renowned senior lawyer, Senator Onyeabo Obi. It will witness goodwill messages from political leaders and foremost jurists. It will also be streamed on several social media channels as well as feature sensational saxophonist, BeeJay Sax who is billed to thrill the global audience.

Chief Uwechue is adjudged one of Nigeria’s foremost jurists, with many leading precedents to his credit. These include Magnusson v Koiki; NAS LTD v BA PLC; Ashibuogwu v AG Bendel State, and the regularly referenced Adeniyi v Governing Council of Yabatech which concurrent verdicts of the trial court and Court of Appeal he upturned at the Supreme Court upon being hired by the appellant.

A longstanding Faculty member at the Nigerian Institute of Advanced Legal Studies (NIALS), Chief Uwechue was appointed as a Member of the Rules of Court Advisory Committee of the Supreme Court between 1985 and 1986. He produced a draft review of the rules which was later subsumed into the Supreme Court Rules 1999 (as amended).

Chief Uwechue, the “Owelle of Ogwashi Uku,” was born on 30th November, 1938. He was a two-time member of the House of Representatives, representing Aniocha Federal Constituency of former Bendel State on two different party platforms. He rose to the pinnacle of the House leadership following his assumption of office as the Speaker pro Tempore.

Following the interruption of civil rule by the military, he returned to law practice and again rose to the apogee of the legal profession with his admission into the Inner Bar and his election as Chairman of the Body of Benchers, the apex body that regulates the profession in Nigeria.

He was admitted into the Honourable Society of the Middle Temple, Inns of Court School of Law for the English Bar in February 1961 and passed the “British Constitution” with distinction at the North Western Polytechnic, London. He repeated this uncommon feat at the Holborn College of Law, Languages and Commerce where in 1962 he again earned Distinction in “Constitutional Law.” His teacher and one of the world’s foremost constitutional lawyers, Prof. Ben Nwabueze SAN once described Chief Uwechue as unarguably the best among his classmates. This was during the launch of a compendium written by leading Nigerian jurists in Uwechue’s honour.

Chief Uwechue enrolled at the London School of Economics and Political Science courtesy of his mentor, Prof. Nwabueze, and in 1965 received his Bachelor’s Degree in Law, graduating with Second Class Honours. He returned to Nigeria the same year and enrolled at the Nigerian Law School. Having passed the Bar Finals, Chief Uwechue was admitted to the Nigerian Bar on January 21, 1966 – almost 55 years ago.