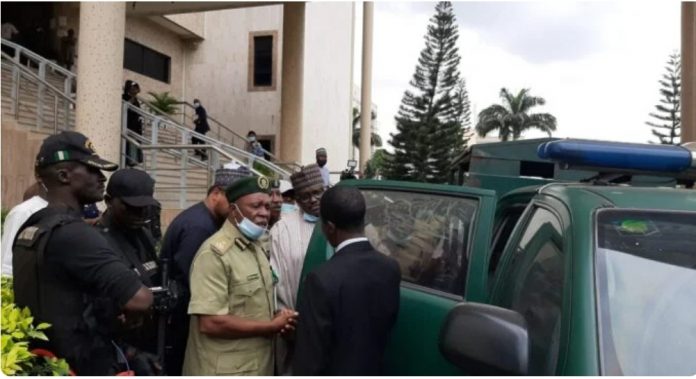 There was a commotion at the federal high court in Abuja on Monday after the sentencing of Abdulrasheed Maina, former chairman of the Pension Reform Task Team (PRTT).

Maina was sentenced to eight years in prison after being found guilty of money laundering.After the verdict was delivered, operatives of the Economic and Financial Crimes Commission (EFCC) clashed with officials of the Nigerian Correctional Service (NCoS).Security personnel from both organisations had an altercation while attempting to take custody of Maina.

Following the sentencing by the judge, prison officials, who were already on standby in the courtroom and within the court premises, led Maina out.However, confusion started when EFCC operatives insisted that Maina must go in their vehicle.The EFCC had arraigned Maina on a 12-count charge of money laundering to the tune of N2 billion.

Delivering the judgment, Okon Abang, trial judge, held that Maina stole over N2 billion belonging to pensioners, “most of whom have died without reaping the fruits of their labour”.“I find the defendant (Mr Maina) guilty and convicted in count 2, 6, 9, 3, 7 and 10,” Abang held.The judge said the former PRTT chairman is guilty of concealing his true identity as a signatory to accounts opened in two banks – UBA and Fidelity bank – by using the identity of his family members without their knowledge.The accounts had cash deposits of N300 million, N500 million, and N1.5 billion.

He said throughout Maina’s service as a civil servant, his salary and emoluments could not amount to the monies in these accounts.The court also found Maina guilty of purchasing a property in Abuja, with cash, in the sum of $1.4 million, which is above the statutory threshold of N5 million and without passing through a financial institution.