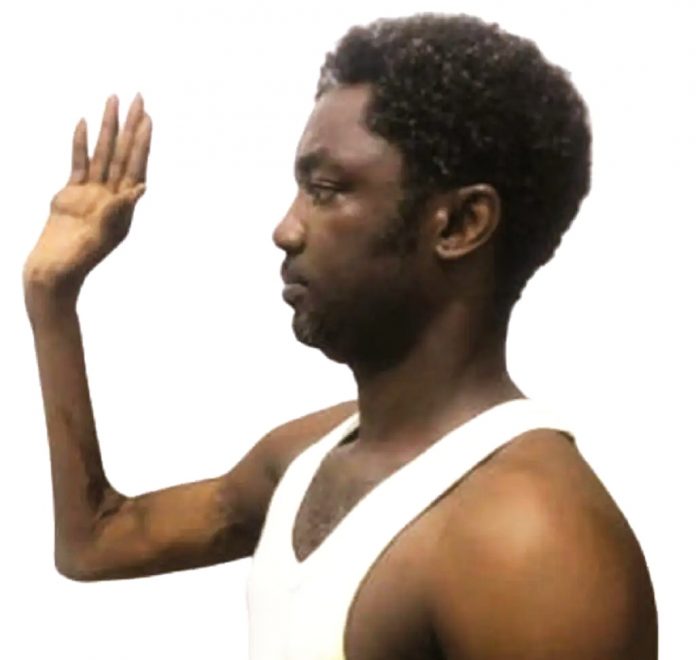 In 2011, newly married Tomori Gbolagade had everything to live for. With a beautiful wife, a nice car and a good-paying job in one of the best entertainment companies in Lagos State, Tomori looked to the future with hope.The tall talented young man even dreamt of starting his own creative company one day and employing some young creative minds like himself.

All that dream evaporated in a second as the hot bullet from the rifle of a drunken police officer pierced his car boot, ripped through his back seat and eventually lodged into his right hand. Since then, Tomori has been fighting for his life, career, marriage, mental health and justice against the Nigeria Police.Below is the narrative of his torturous ordeal as a police accidental discharge victim.

The incident happened on September 31, 2011. I was working for Wale Adenuga Production as a Creative Director. We had an event at the National Theatre at Orile-Iganmu, Lagos on Friday, September 31.

So I worked very late in preparation for the show. I left the office around 10:30 pm. On my way home to Egbeda while driving in the company of a friend, on getting to a roadblock mounted by policemen in front of the Egbeda Police Station, I was flagged down.

Two other cars were behind me. As I tried to pull off the road as instructed by the police officers, I suddenly heard gunshots and everybody started scampering for safety.Within seconds, we heard another gunshot and I felt some coldness on my right hand.

It was then I realised I had been shot. My hand was filled with blood. The gunshot came through the back, piercing my boot and back seat before hitting my right hand which was on the armrest.I immediately came down from the car shouting that I have been shot. To my greatest surprise, as I moved towards the police officers, they started running away. My friend quickly rushed me into the Akowonjo Police station which was actually where the road block was mounted.

Immediately they saw me drenched in blood, they refused to let us inside their station. They kept asking us useless questions about who shot me whereas they saw what happened. It was later that we were told that the officer that fired the gunshot was dead drunk.

On getting to Lagos State University Teaching Hospital at about 11:30 pm, we were told that there was no doctor to attend to me.I was there with the gunshot wound from Friday till Sunday before I was attended to. By then, my right hand was already swollen with blood.My employer on hearing about my predicament later sent an ambulance to take me to a private hospital in Ajao Estate. When they saw the severity of the wound, they referred me back to LASUTH.I spent a month there undergoing several procedures to treat the wound. The arteries and veins on my hand were badly damaged so that procedure to restore the hand was severe and painful.The hand became inflexible because the tendons were also badly damaged.

The doctors did their best but recommended that only a total hand reconstruction procedure abroad can make the hand regain flexibility. I was also warned that if the procedure was not done, the hand might have to be amputated.I must add that throughout my stay at the hospital, the police visited me once and brought one sachet of milo and peak milk.I even jokingly told them that they should have added sugar, but they ignored me.

I spent all my savings on the treatment with little support from family and friends.After I left LASUTH, I spent the next seven months gathering funds for the surgery in India.I sold my car and other properties and even took loans to be able to pay the $10,000 medical bill.I also had extra cash for accommodation and feeding. When I approached the DPO of the Police Station where the incident happened, for support, I didn’t get any response.

The then Lagos Commissioner of Police intervened, but still, no money was released to assist me.Somehow, I was able to raise the money and travelled to India where they initially gave me hope that the damage to my hand can be fixed but through about nine procedures.The nine procedures were broken down into three stages.In the first three stages of the operation, they had to do skin grafting and make the stiff hand a little bit flexible. I was able to gain proper blood supply to the hand after a deep hole on the hand was filled with my skin.I was given 24 months to return for the second and third stages because I could not afford the cost which was estimated at $10,000 each back then.

In 2012, I sued the Nigeria Police over the incident and also joined the officer who fired the shot. After five years of trial, the court eventually asked the Police to pay me $31,000, $15,000, N2.3 million and N5million as damages to cover my medical expenses and general damages.Coincidentally, I was able to get a judgment on the day and month (September 30, 2015) that I was shot.Ayuba Phillips was the officer that shot me. I didn’t know if the police disciplined him. I remember getting a call from someone asking for where I reside so they could come and apologise to me.

When I refused, they started threatening me that if I don’t drop the case, something might happen to me.I immediately knew I had to be careful. After a while, they stopped calling. It is really sad but I can’t give up on the struggle to get justice.

I went through hell during that period. I was born a natural right-handed person but after the incident and the initial medical procedure, I had to start learning to use my left hand to do everything. I can tell you that it was really difficult.As a graphic artist, I do a lot of designing and editing of movie graphics. My two hands are required to operate a computer.All of a sudden, for me to retain my source of livelihood, I had to learn how to do everything with my left hand.

My fingers are stiff.Imagine the frustration of trying to work with just one hand, tie your shoe or drive a car with just one hand. I had to do all that because my family would suffer if I am not able to provide for them.I had to take extra time to deliver on a job that would have ordinarily taken me a short time. It got so bad that whenever I drove through the Third Mainland bridge, I always contemplated jumping into the lagoon.

For years, thoughts of suicide dominated my mind. Several times, I tried to end it all, but each time, something held me back.The mental disorder was just too much for me to bear. When I hear about Tramadol these days, I often laugh because it has been my medication for a long time. While in India, they put me on Tramadol to ease my pains.By that time, I didn’t know the drug was addictive. It gave me ease, so I take it regularly.The drug also affected my reproductive organs. Impregnating my wife became a problem until the doctors traced the problem to my high Tramadol intake.

I believe this country operates a failed system. The people that are supposed to be protecting the citizens shot me and refused to take responsibility. The hospital that was supposed to provide care failed me.

Many times, I nursed the thought of killing every policeman I see. Any time I see a policeman on the street, I feel like killing him.The thoughts of becoming a serial killer of policemen were also there. I tell you, it would have been easy because I am a clever person and executing the plan would not have been difficult for me.Honestly, I almost crossed the thin line between being good and evil. I would have killed a lot of policemen if not for God.

The court eventually granted me monetary compensation against the police, but they refused to comply with the judgment. Can you imagine a system that cannot enforce its own judgment? I also realised that many people before me, had gotten judgment against the police but nothing has been done.If the system can put somebody through this kind of hell, why won’t there be insurgency and Boko Haram and many other unexplainable killings and maiming? In fact, I desperately sought to disown Nigeria. I wanted to escape even to Ghana or Togo just to escape the madness and injustice in Nigeria.

From hate to compassion

At some point in my struggles, I began to realise that the police are also a product of our failed system. I see them under the hot sun with tattered uniforms, with meagre salary and I also realised that they are victims of the failed system. When they are not being paid well to protect us, they will simply turn us to prey.I feel the police are victimising the citizens because they are also victims. These are people’s fathers and mothers with responsibilities like every one of us.When their salaries cannot feed their families, the alternative is to beg or force people to give them at gunpoint.My attitude towards them has now changed from hate to compassion. I wish the government will do something about their welfare. I heard their salaries have been increased recently, but I don’t think salary is the problem. The problem should be tackled from the source.Majority of the police officers are old cargoes. It’s like using a Nokia 3310 in 2021; obviously, you are out of touch with reality.

Struggle to get judgment sum

On a yearly basis, I have been writing to the Inspector-General of Police through my lawyer, Monday Ubani for the payment of the N5 million the court ordered the police to pay me. We have also written to the Chief Justice of Nigeria and even the National Assembly but no response.I have also sought assistance through my Representative at the House of Assembly but nothing came out of it. One senior police officer took up the case and later told me that he couldn’t get the file passed to some offices at the Police headquarters in Abuja.

The right hand is still stiff and I still can’t do anything about it because I have not been able to do the two remaining procedures. I am still in contact with the Indian hospital.Some years back, I started paying the bill instalmentally but after a while, when I could not send any significant amount; the hospital refunded the N250,000 they received from me.I will never give up on this matter. As long as my hand can still be restored to its normal state, I will not give up.I will continue to seek every avenue available to ensure that I get justice and get my right hand functional again. I also seek support from well-meaning Nigerians.