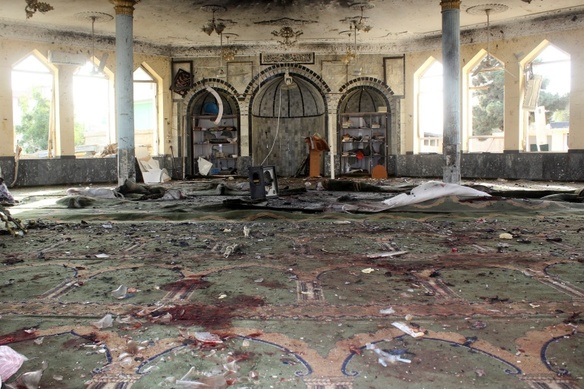 A suicide bomber has killed at least 100 at a Shi’ite mosque in northern Afghanistan after a string of ISIS-K attacks as the country descends further into chaos in the wake of the US withdrawal.

Scores more victims from the minority community were wounded in the blast, which has not been claimed but appears designed to further destabilise Afghanistan in the wake of the Taliban takeover.The extremist Islamic State group, bitter rivals of the Taliban, has repeatedly targeted Shiites in a bid to stir up sectarian violence in Sunni-majority Afghanistan.The blast, which took place during Friday prayers, the most important of the week for Muslims, is the deadliest attack since the US withdrew and the Islamists took power at the end of August.A medical source at the Kunduz Provincial Hospital said that 35 dead and more than 50 wounded had been taken there, while a worker at a Doctors Without Borders hospital reported 15 dead and scores more wounded.Taliban spokesman Zabihullah Mujahid had earlier said an unknown number of people had been killed and injured when ‘an explosion took place in a mosque of our Shiite compatriots’ in Kunduz.Residents of Kunduz, the capital of a province of the same name, said the blast hit a Shiite mosque during Friday prayers, the most important of the week for Muslims.

Zalmai Alokzai, a local businessman who rushed to Kunduz Provincial Hospital to check whether doctors needed blood donations, described horrific scenes.”Ambulances were going back to the incident scene to carry the dead,” he said.An international aid worker at the MSF hospital in the city told AFP there were fears the death toll could rise even further.”Hundreds of people are gathered at the main gate of the hospital and crying for their relatives but armed Taliban guys are trying to prevent gatherings in case another explosion is planned,” he said.The Taliban have been targeted in a series of deadly IS attacks, including shooting ambushes and an explosion at a mosque in the capital of Kabul.

The explosion went off during the weekly Friday prayer service at the Gozar-e-Sayed Abad Mosque. The Friday noon prayer is the highlight of the Muslim religious week, and mosques are typically crowded.Photos and video from the scene showed rescuers carrying a body wrapped in a blanket from the mosque to an ambulance.Graphic images shared on social media, which could not immediately be verified, showed several bloodied bodies lying on the floor.Pictures showed plumes of smoke rising into the air over Kunduz and the stairs at the entrance of the mosque was covered in blood.Another video showed men shepherding people, including women and children, away from the scene. Frightened crowds thronged the streets.Aminullah, an eyewitness whose brother was at the mosque, said, ”After I heard the explosion, I called my brother but he did not pick up.”I walked towards the mosque and found my brother wounded and faint. We immediately took him to the MSF hospital.”A female teacher in Kunduz said the blast happened near her house, and several of her neighbours were killed.

‘It was a very terrifying incident,’ she said.”Many of our neighbours have been killed and wounded. A 16-year-old neighbour was killed. They couldn’t find half of his body. Another neighbour who was 24 was killed as well.”Earlier Friday, the chief Taliban spokesman Zabihullah Mujahid said the Shiite mosque was the target and that a ‘large number’ of worshippers were killed and wounded.Often targeted by Sunni extremists who view them as heretics, Shiite Muslims have suffered some of Afghanistan’s most violent assaults, with rallies bombed, hospitals targeted and commuters ambushed.He said Taliban special forces had arrived to the scene and were investigating the incident.Kunduz’s location makes it a key transit point for economic and trade exchanges with Tajikistan. It was the scene of fierce battles as the Taliban fought their way back into power this year.

The Taliban leadership has been grappling with a growing threat from the local Islamic State affiliate, known as the Islamic State in Khorasan.IS militants have ramped up attacks to target their rivals, including two deadly bombings in Kabul.The local Islamic State affiliate has also claimed responsibility for the horrific August 26 bombing that killed at least 169 Afghans and 13 US military personnel outside the Kabul airport in the final days of the chaotic American pullout from Afghanistan.IS has also targeted Afghanistan’s religious minorities in attacks.Shiites make up roughly 20 percent of the Afghan population. Many of them are Hazara, an ethnic group that has been heavily persecuted in Afghanistan for decades.In October 2017, an IS suicide attacker struck a Shiite mosque as worshippers gathered for evening prayers in the west of Kabul, killing 56 people and wounding 55 including women and children.And in May this year, a series of bombings outside a school in the capital killed at least 85 people – mostly young girls. More than 300 were wounded in this attack on the Hazara community.

2 men lure girl from Lagos to Ibadan, kill, dismember her