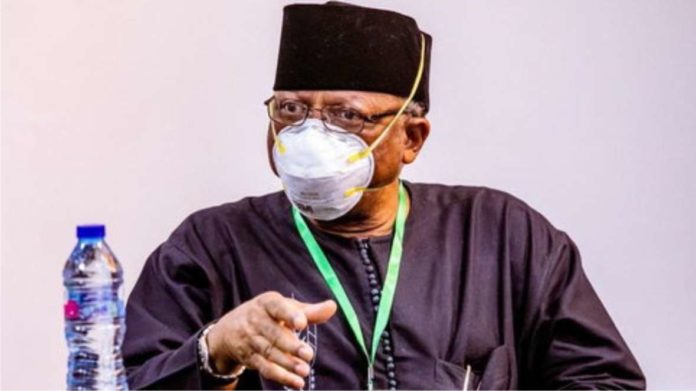 The Federal Government has described the ongoing strike by the National Association of Resident Doctors (NARD) as a big mistake.

The Minister of Health Dr Osagie Ehanire begged the doctors to return to work on Friday.

Addressing reporters in Abuja on Thursday, he said the ongoing action portrayed the doctors in a bad light especially when the nation struggles to check the third wave and Delta strain of the COVID-19 pandemic.

He said innocent Nigerians should not be put at risk because of money-related issues, especially as efforts were being made to address them.

He said the doctors should not work at cross purposes with the government and defeat efforts at providing adequate health care for Nigerians.

He said it was not a good time to let the masses down and urged the doctors not to exploit the anxiety of the period to push for their demands.

He said abandoning their work would sabotage the efforts of the government, including the establishment of 125 isolation and treatment centres, at containing the pandemic and likely cause an explosion of the virus.

He expressed displeasure over reports that patients showing symptoms of COVID were being turned away in hospitals because of the strike.

The Minister said the strike came as a shock to the government because efforts to address the issues were ongoing and called for dialogue to resolve the matter.

He said as soon as both representatives agreed, it will be resolved and payment of hazard allowance implemented.

“NARD is advised to work with NMA to sort out the delay in payment, rather than blame the government,” he said.

This, he said, was communicated to NARD Representatives at a meeting hosted by the Federal Ministry of Labour and Employment on 22nd July, 2021.

He said due diligence is ongoing to clean up submissions from hospitals engaging resident doctors because 2020 payments were corrupted and found to have been marred with double payments to over 500 residents, costing loss of funds to the government.

He said NARD has admitted this and agreed to support the government in the recovery of funds that were wrongfully paid to their members.

Also addressing the issue of migration of Resident Doctors from GIFMIS to IPPIS platform, he said: “The process of migrating NARD members to IPPIS is ongoing, though temporarily suspended to clear some issues and will resume shortly.”

Also talking on the issue of Group Life Insurance, he said the Federal Government has paid a total sum of N9.3 billion to Insurance Companies for Life Group Insurance and payment of death benefits for Health Workers.

“The Federal Ministry of Health is in receipt of 131 cheques totaling N159,233,234.00 from various insurance companies for 46 NARD members from 52 health facilities for group life insurance. Currently, additional 95 cheques are being processed from various insurance companies. It is noteworthy that insurance claims are dependent on due diligence. Submissions from the hospitals where some deceased Resident Doctors worked did not have complete documents (such as last pay slip for claim payment etc).

“This was communicated to NARD Representatives at the meeting convened by the Federal Ministry of Labour and Employment on 22nd July, 2021. NARD was advised to follow up their submissions from the Hospitals where the deceased members worked,” Ehanire said.

On the issue of provisional suspension of bench fees, he said the Federal Government has already suspended payment of bench fees and this has been communicated to the Chief Executives of all Federal Tertiary Health Institutions vide Circular DHS/828/T.2/26 dated 14th April, 2021.

He said the abolition of bench fees makes training of resident doctors free, receiving full salaries and allowances while undergoing specialist training bond-free. He said there is nowhere in the world where such a gesture is obtainable.

He said an isolated case of demand for payment of bench fees was reported in Lagos University Teaching Hospital. He said the CMD had been advised accordingly and any fees paid after the issuance of the Circular provisionally abolishing the fee is to be refunded.

He said the consequential adjustment of minimum wage arrears affects all hospital workers and not only resident doctors.

He also said the removal of House officers Cadre from the established post in Civil service is a decision of the National Council on Establishment, which is a body that regulates and provides guidance on Federal and State Government establishment matters.

The Minister also frowned at House Officers joining the strike saying it was going to interrupt their training process as doctors, as well as create logistic problems for the entire system.

Also at the briefing were the Minister of State, Health, Dr. Adeleke Mamora, and the Permanent Secretary, Abdulaziz Abdullahi.

Nnamani: Ugwuanyi will choose next Enugu governor — that’s our tradition