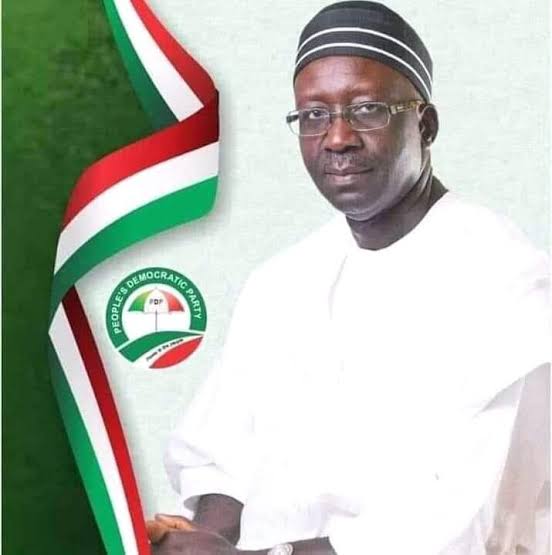 A Coalition of Peoples Democratic Party Support Groups from the 25 Local Government Areas of Delta State, under the umbrella of the Ijaw Mandate Group (IMG) on Wednesday carried out a solidarity March in Abuja to pass a vote of confidence on the leadership of Senator Iyorchia Ayu led National Working Committee and declared ‘total’ support for the candidacy of Rt. Hon. Sheriff Francis Oborevwori in the battle for the governorship of Delta state.

In a statement made and signed by all the leaders, the group dissociated themselves from and flayed an earlier protest by some youths who called for the resignation of the National Chairman of the party over a matter that is already subsisting in court.

They submitted a solidarity letter to the national secretariat of the party addressed to the National Chairman, which reads, “We, a coalition of People’s Democratic Party (PDP) support groups cutting across the 25 Local Government Areas of Delta State under the umbrella of Ijaw Mandate Group (IMG) are here in solidarity with you for providing leadership for the Party at all levels and to brief you of how some undemocratic forces are working against the PDP in Delta state.

“Permit us to present our deep concerns over a dangerous trend in Delta state PDP wherein some members of the Party have resorted to subversive activities that are hell bent to destroy the Party and its chances in the 2023 general elections in the state. At the same time, we also want to draw the attention of National Chairman and the National Working Committee to the vituperation of some career opportunists in the state PDP that rented some youths under the guise of Concerned Deltans for Good Governance who sneaked into the Party Secretariat to protest against the Party calling for the resignation of the National Chairman over a matter that is already subsisting in court.

“We the coalition, the true voice of PDP support groups in Delta state are unequivocal to say that the actions of the said group do not represent the views and support of the Party and its leadership in the state, and as such, it should be disregarded for lack of merit.

“Without mincing words, IMG is unequivocal to say that PDP has enjoyed being the ruling Party in Delta state since 1999 since the outset of democratic rule in the country. The Party has visibly delivered the dividends of democracy in the state. The Delta state PDP has always been peaceful. The Party has continued to maintain this peace under the able leadership of our amiable governor and Vice Presidential candidate of the Party, Senator (Dr.) Arthur Ifeanyi Okowa.

“As a matter of fact, Delta state was lucky to have a good governorship candidate in the person of RT. Hon. Sheriff Francis Oborevwori who was thrown up through one of the most peaceful primaries in the country. Hon. Sheriff is a man with an excessive local content, grounded in governance and in state affairs. Hon. Sheriff has garnered vast experience in legislative business, which makes him the longest service member in the Delta State House of Assembly as the Speaker since 2015 till date, and still counting. He is the Vice Chairman, Conference of Speakers of State Houses of Assembly in Nigeria. Ultimately, he became the choice of the Party and chosen through a transparent electoral process. And with no doubts, he will lead the Party to victory in 2023.

“We have come to report to you that rather than towing the path of honour, those who lost in the primary have become intolerant and gone ahead to take the Party to court. They are predicting and working against the Party, inciting the public against the interest of the Party and accusing the national leadership of manipulating the Independent National Electoral Commission (INEC) from complying with the judgement of the Federal High Court thereby calling for the resignation of Party’s national Chairman, Senator Ayu Iyorchia.

“This is inconceivable and a huge joke, we condemn it in its entirety. We view this as the height of unrestrained political rascality. For the avoidance of doubt, the case is before an appellant court. Until the determination of the case, it is subjudice and contempt of court to pre-empt its outcome, which the uninformed youths have grossly violated. They are spreading falsehood and attacks on the Party leadership and individuals as means of achieving political control.

“In spite of several counsels by well-meaning Party leaders in the state, they have willfully attracted hatred, discord, ridicule and disrespect upon the party. This is even as they were unbraided for desperately going against the party and adopting a combination of lies, deceit and inciting the public as operational creed to hide their sinister agenda.

“The discerning public understands the fact that the court is a sine qua non for our democratic process. The court is the threshold of justice, a temple of justice and justice alone. Therefore, our confidence in the judiciary, which is the last hope of the common man is unwavering. In fact, RT. Hon. Sherriff has since appealed against the judgement of the Federal High Court. And until the appellant court gives verdict, he remains the standard bearer to fly the Party’s flag in Delta state. Therefore, we urge our supporters to remain calm and be law abiding. We have no doubts in our minds that we will get justice and justice will be served at the appellant court.

They demanded for stern action against the opponent of Sheriff Oborevwori for allegedly creating division in the party adding, “we are using this medium to pass a vote of confidence on the National Chairman of the Party Senator Ayu Iyorchia and members of the NWC for their outstanding performances in coasting the Party to victory in Osun state thereby reclaiming the state back into the PDP fold.

GRAVE ERROR: CNN Mis-Identifies Shettima (rather than Tinubu) as Presidential Candidate of APC

70% Of Voters For 2019 Presidential Poll Illiterates — We Must Tame Ignorance Says Banire, SAN