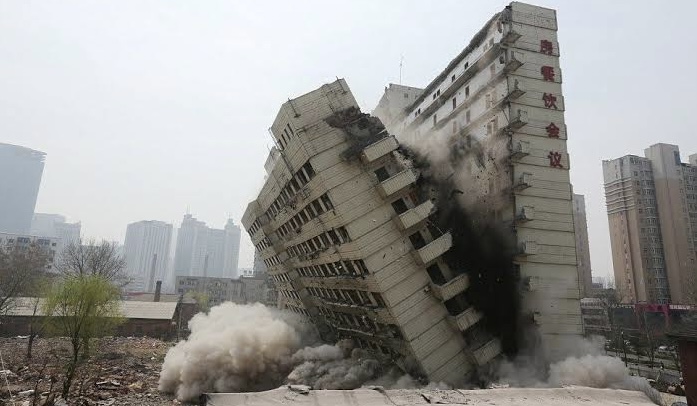 The death toll from a Russian missile strike on an apartment block in the central Ukrainian city of Dnipro over the weekend continued to rise on Monday, even as dozens remained missing in the debris.

Rescuers continued to search the rubble of the nine-storey residential building which partly collapsed after being struck by a missile on Saturday.

Authorities said at least 40 people are dead, including three children, after more bodies were recovered during the night.

At least 75 people were wounded in the strike, including 14 children, according to Valentyn Reznichenko, the military governor of the Dnipropetrovsk region.

He said more than 100 people survived the strike.

In sub-zero temperatures, there was little hope of finding any more survivors, although Reznichenko insisted – like Ukrainian President Volodymyr Zelensky – that “the search for people under the rubble continues.”

The destruction of the block of flats has become a symbol of the war’s brutal toll on Ukrainian civilians.

The strike on Dnipro was the worst of numerous Russian air attacks over the weekend that particularly targeted Ukrainian civilian energy infrastructure.

The European Union condemned Moscow for the missile strike, saying that Russia’s “continued heinous strikes” on Ukraine would only serve to strengthen the EU’s resolve to support Kyiv.

The European Commission also announced that the first payout of €3 billion ($3.2 billion) in loans for Ukraine from an €18-billion support package is to be issued on Tuesday.

Mr Peskov claimed that Russia had only attacked military targets in Ukraine, even though Russian shells have repeatedly killed many civilians throughout the invasion.

Russia continued to shift the blame for the recent intensification of hostilities on Kyiv during a phone call between Mr Putin and Turkish leader Recep Tayyip Erdoğan.

“Vladimir Putin emphasised the Kyiv regime’s destructive policy of continuing to intensify the hostilities with the support of its Western sponsors, which are still sending more arms and combat equipment to Ukraine,” the Kremlin said following the call.

The Kremlin again accused Kyiv of a lack of willingness to negotiate, saying that Ukraine had rejected their recent ceasefire proposal.

Ukraine has repeatedly stressed its willingness to negotiate, but only if Russian soldiers return territory occupied in violation of international law.

The extensive exercises will involve all air bases and other military installations in Belarus, according to the Belarusian Defence Ministry.

Belarus has so far not become directly involved in the war, although Russian military forces used bases in the country to launch attacks early in the invasion.

Western military analysts consider a major Russian offensive from Belarus to be unlikely at the moment, in part because Russia does not appear to currently have large concentrations of troops in the country.

While Ukraine fears further attacks from one neighbouring country, another continues to supply Kyiv with arms.

The state-owned manufacturing company Konstrukta-Defense is already working on a follow-up order for Ukraine, said the ministry.

This would involve a further 16 Zuzana 2 howitzers, to be paid for jointly by Germany, Denmark and Norway.

Mr Zelensky in his daily evening address on Monday, again called for heavy weapons from the West and praised Britain for already deciding to send some.

“A new defence aid package has been announced – exactly what is needed: Main battle tanks, other armoured vehicles and artillery,” the 44-year-old president said.

Mr Zelensky said he expected decisions on further arms deliveries from the World Economic Forum in Davos, which kicked off on Monday, and the Ukraine Contact Group conference in Ramstein, due to meet on Friday at the U.S. air base in Germany.

The president urged the West to hurry up with the delivery of the desired tanks. Russia’s attack on Dnipro and its new attempts to seize the initiative in the war required “new solutions” and faster decisions.

Mr Zelensky pointed to heavy Russian troop concentrations in the eastern Ukrainian region of Donbass, especially around the towns of Bakhmut and Soledar, but also in southern Ukraine.

“We will see what Russia is preparing here,” the president said.