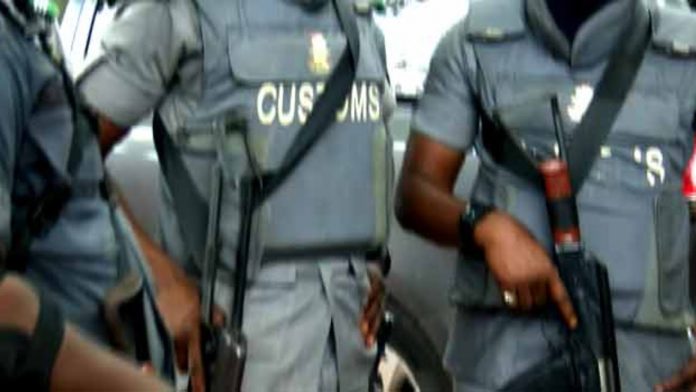 Stray bullet by operatives of the Nigeria Customs Service (NCS) has reportedly killed a two-year-old girl in Ilaro, Ogun State on Thursday.

It was gathered that the incident happened at Itawaya, near the Federal Polytechnic, Ilaro, Yewa South Local Government Area of Ogun State, when the NCS men were on the trail of some suspected smugglers.The child was rushed to a hospital, where she was pronounced dead having lost too much blood.

There were gunshot injuries near the girl’s armpit, suggesting that the bullet penetrated through that part into her body.It was also gathered that a young man also sustained gunshot injuries in the incident that raised tension among residents of the area.

Sources said that a customs officer opened fire while chasing a man suspected to be conveying foreign rice.“Those customs officers thought the man was smuggling rice, so they opened fire on him. “It was one of the stray bullets that killed the child and also inflicted injuries on the mother. “It was after they have committed murder that they realized the man they were chasing was not with rice. That’s what we face here all the time.

Speaking on the incident, the NCS in Ogu 1 Area command, Ahmed Oloyede, confirmed the incident, describing it as highly devastating.He said the command is saddened with the ugly development, adding that investigation has commenced into the incident.“We are sad and devastated that this happened in the line of duty. It is not our joy. This incident is highly pathetic. “We sympathise with the family of the minor and the command is making efforts to contact them.“The Controller has also ordered investigation into the incident towards putting an end to similar incidents going forward,” Oloyede said.