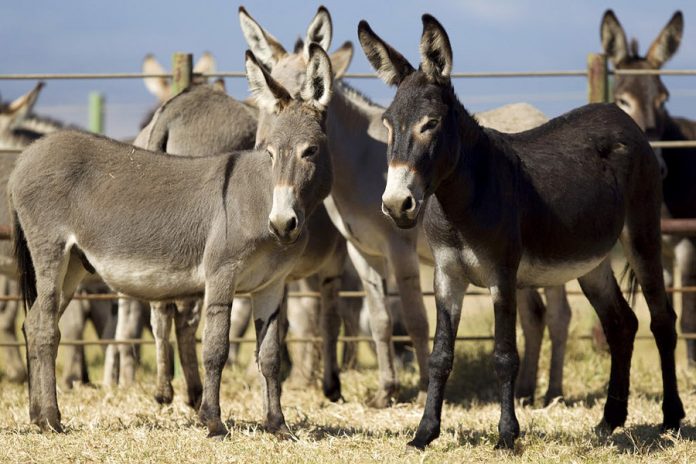 No fewer than four Civil Society Organisations on Wednesday stormed the streets of Abuja to express displeasure over the continuous “illegal” slaughter and exploitation of donkeys by Chinese nationals.

The CSOs are; Civil Society Situation Room, Guards Against Economic Sabotage in Nigeria, Guardians of Democracy and Rule of Law, and Patriotic Nigerians Against Social and Economic Injustice.

The groups said this heinous act has continued despite orders by the Federal Government and the National Assembly.

The convener, Emmanuel Onwudiwe and the secretary, Comrade Emmanuel Ogwuche, accused the Minister of Agriculture, Mahmood Mohammed, of conniving with these foreigners.

According to them, the minister has declared war against the Federal Government, describing his action as a “threat to our democracy, sovereignty and rule of law.”

Onwudiwe said, “A few weeks ago, we held a world press conference where we strongly condemned the direct and continued disobedience of Presidential directives by some Chinese nationals who are said to be working in connivance and consonance with the Minister of Agriculture, Dr Mahmood Mohammed.

“You would recall that Muhammed Buhari GCFR, President of the Federal Republic of Nigeria and Grand Commander of the Armed Forces, on the 21st of March, 2022, after a Federal Executive Council Meeting, issued a directive that foreigners are not permitted to directly go into the forest and engage in direct purchase and slaughter of Donkeys.

“This memorandum was duly forwarded to all the relevant stakeholders in the Agro Business, including the Ministry of Agriculture. Our dear President who has unmistakable good intentions for the growth and development of the federal republic of Nigeria, also caused a committee, under the chairmanship of Suleiman Audu, to be inaugurated with the specific mandate of enforcing the ban on foreigners from directly purchasing farm products from farm gates.”

Ogwuche also said, “It is therefore inexcusable that the Minister of Agriculture, Dr Mohamed Mahmood Abubakar, has allegedly continued to give tacit approval to Chinese nationals to go into the forest and deal directly in these businesses against the direct orders of the President of the Federal Republic of Nigeria, and in flagrant disregard of our sovereignty. We have pictorial evidence of these Chinese Nationals directly and blatantly going into the farm gates to deal directly with these businesses against the directives of the president.

“The continued silence of the Presidency over this declaration of war against the directives of the president by an appointee of his is a threat to our democracy, sovereignty and rule of law. There is no doubt that more appointees seeing that no serious action is taken against recalcitrant Mahmood, will employ similar crude measures to demean the exalted office of the President of the Federal Republic of Nigeria in pursuit of selfish ends.”

Recall that there was controversy over the bill in July when the Senate committee on Agricaute held a public hearing on the ban on donkey business in Nigeria.

While some propose an outright ban on the slaughtering of donkeys over the fear of extinction, others said the regulation of the donkey business is to curb smuggling and that ranching and breeding could address the depletion of the animal population.

The Donkey Slaughter, Regulation and Export Certification Bill, currently under consideration in the National Assembly, seeks to regulate the slaughter of donkeys in Nigeria and ensure the classification of the animal as an endangered species – which as a result of indiscriminate slaughtering for its skin, has greatly depleted the national herders.