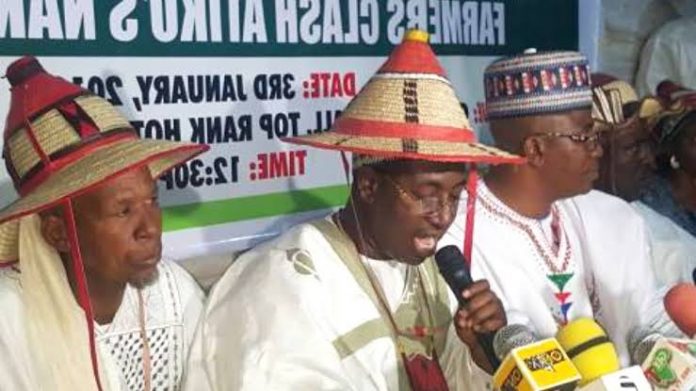 The Miyetti Allah Kautal Hore, also known as Miyetti Allah, has said Benue State Governor, Samuel Ortom, will face justice for “violating the rights of Fulani herders” in his state.

The National Secretary-General of the Fulani socio-cultural group, Mr Saleh Alhassan, also said Miyetti Allah had approached the International Criminal Court of Justice, Hague, to file a suit against Ortom for seizing over 25,000 cows belonging to members of the group and detaining over 4,000 herders.

Ortom had, after inaugurating the state’s Community Volunteer Guards, said he had secured the conviction of over 400 Fulani herders ‘besieging’ the state.

The governor said, “We have secured the conviction of over 400 Fulani herders, who have besieged the state. We have seized over 25,000 cows. We released some of the cows to the owners who paid fines and auctioned the cattle of those who did not pay because that is what the law says to ensure that we protect our lands.”

Reacting to this development, Alhassan said Ortom was known for always “abducting and keeping” cows belonging to Fulani herders.

“He (Ortom) would go to Benue and Taraba states border communities and seize cows, making our members suffer. We don’t have herders in Benue. So, the livestock that he seized shows that he is part of the problem.

“He is destroying the economy of our people in the border states. We have raised that issue, prepared our documents and sued him before the International Criminal Court in Hague.

“We sued him for stealing our cattle in Nasarawa and Taraba border communities and for also detaining our innocent youths and dumping them in his dungeon because he is a governor.

“He is not arresting herders for violating anti-open grazing law because there are no herders in Benue. The law which he assented to in his state Assembly stated that for a herder to function, there must be a ranch.

“Ortom has failed to provide a ranch for us. Let him finish all this wickedness. He will still leave and the herders in Nigeria will continue to exist, prosper and be better,” he said.

Alhassan also noted that Ortom had performed “woefully. So, he needs these diversionary tactics to be able to stay relevant.”

“I just pity the innocent people of Benue State. We have asked these people to investigate and probe the quantum amounts of security votes he (Ortom) has diverted from the state.

“He is a total failure and has seen failure staring at him in the face. After almost eight years, what are the developmental achievements he can present?

“We have stopped taking him seriously with regards to governance. We are taking a number of legal actions against him. We have also written to the President (Muhammadu Buhari) for compensation,” he added.