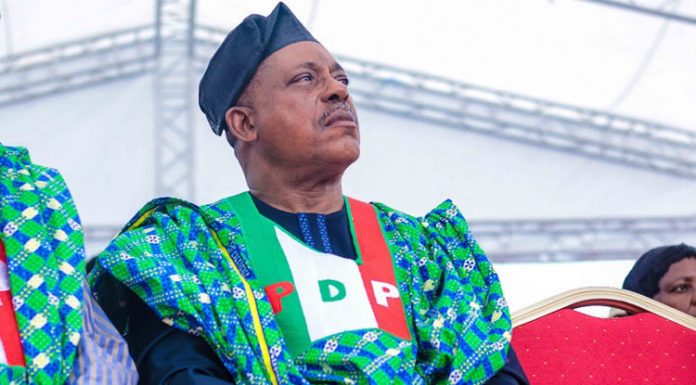 On August 23, a high court in Rivers state granted an interim order restraining Secondus from parading himself as the national chairman of the party.But on August 26, Nusirat Umar, judge of a high court in Kebbi state, ordered that the execution of the previous order barring Secondus from parading himself as national chairman be suspended, pending when the suit is heard and concluded.Umar had given the order while delivering ruling in a motion ex parte brought in a suit marked KB/AC/M.170/2021

However, delivering ruling on Thursday in another suit marked KB/HC/M.191/2021, filed by one Ibeawuchi Ernest Alex and four other persons, Umar made a U-turn from her previous pronouncement.She rebuked counsel to the claimants/applicants, whom she said concealed important facts from the court when the ex parte motion was heard.Umar added that the court lacked the jurisdiction to hear and determine the previous matter.

“I equally agree that Kebbi state high court has no jurisdiction to hear and determine a matter that has been filed and determined in any high court in Nigeria, reason being it is a court of co-ordinate jurisdiction,” she said.“Furthermore, I also agree that the claimants’/respondents’ counsel failed to disclose to the court the true subject matter of this matter, namely the suspension of the first defendant, prince Uche Secondus, from the membership of the second defendant (Peoples Democratic Party) by ward 5, Ikuru town, Andoni local government area of Rivers state“There is no doubt that the court was misled by the failure of the claimants’/respondents’ counsel to disclose the true facts to the court which necessitated the court granting the ex parte order on 26/8/2021.“This situation created by the claimants’/respondents’ counsel caused unnecessary embarrassment to the Nigerian judiciary. It is important to state that jurisdiction is very fundamental to the matter adjudication. Whatever proceedings conducted by the court is null and void no matter how well the proceeding has been conducted.

“I cannot end this ruling without commenting on the attitude of the claimants’/respondents’ counsel, a senior lawyer, who has been practising for many years and who is supposed to be a minister in the temple of justice engaging in misleading the court and being economical with the true fact of the case. These acts are condemnable.“Flowing from the above, I entirely agree with the submissions of the applicant’s counsel that the ex parte order which was granted by this court on 26/8/2021 ought to be set aside, even by the Kebbi State High Court Civil Procedure Rules 2017, particularly under Order 39 Rules 3 (3) which provides ‘an order of injunction made upon an application ex parte shall abate after seven days’.“Generally, the court lacks jurisdiction to hear and determine the following: Motion no KB/HC/M.170/2021, substantive suit no KB/HC/22/2021. I hereby set aside the order ex parte application granted on the 26/08/2021 in motion no KB/HC/M.170/2021.“I equally strike out motion on notice no KB/HC/M.170/2021 and the substantive suit no KB/HC/22/2021 for lack of jurisdiction.”

The court’s new decision may not be unconnected to the stern warning issued to judges by Ibrahim Muhammad, chief justice of Nigeria (CJN), over granting of conflicting ex parte orders.The CJN had summoned seven chief judges, including the Kebbi CJ.After a meeting with the judges on Monday, the CJN asked three judges to appear before the National Judicial Council (NJC) to show cause why disciplinary action should not be taken against them for granting the conflicting ex parte orders.The names of the judges were not mentioned.