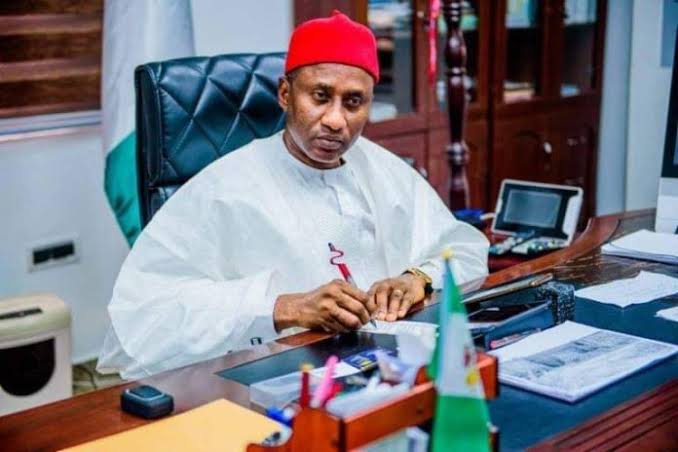 A federal high court in Abuja has affirmed Uche Ogah, former minister of state for mines and steel development, as the duly elected governorship candidate of the All Progressives Congress (APC) in Abia state.

In a judgment delivered on Friday, Binta Nyako, the presiding judge, nullified the candidacy of Ikechi Emenike who was earlier recognised by the Independent National Electoral Commission (INEC).

The Abia APC had held parallel governorship primaries in the state that produced Ogah and Emenike as candidates of the party.

On May 26, the APC declared Emenike the winner of the governorship primary in the state.

Subsequently, ruling in a suit instituted by Chinedum Nwole and two others, an Abia high court declared that Emenike lacked the locus standi to contest the election because he had earlier been suspended from the party.

However, in another ruling, O.A. Chijioke, the judge, granted Emenike a stay of execution on the restraining order earlier imposed.

Emenike, thereafter, approached the high court to determine whether the APC can refuse to submit his name to INEC.

He also prayed the court to determine whether INEC can refuse to publish his name as the APC candidate for the 2023 governorship election.

The court, in its judgment delivered on June 24, mandated APC to submit Emenike’s name to INEC and for the commission to upload his name on its portal.

Also, the court restrained INEC from accepting or publishing the name of any person other than Emenike.

Uche Ogah — who was not a party to the suit and did not participate in the primary that produced Emenike — approached the court of appeal with a motion for leave to appeal the said judgment as an interested party.

Opposing the motion, Emenike’s legal team had argued that the appeal court lacks the jurisdiction to hear the motion since it was filed outside the 14 days stipulated for filing of an appeal in pre-election cases.

On July 20, the court of appeal consequently upheld the preliminary objection against the motion in favour of Emenike.

But Ogah went on to file a separate suit before the Abuja federal high court.

Ogah, therefore, prayed for an order directing the APC to forward his name to INEC forthwith as its duly nominated candidate for the 2023 Abia governorship poll.

Meanwhile, the APC and its national chairman, Abdullahi Adamu, disowned the primary that produced Ogah as the party’s governorship candidate in Abia.

Also, Emenike, through his counsel, Lateef Fagbemi, prayed the court to uphold the nomination of his client on the grounds that he emerged from a primary lawfully conducted by the APC’s national working committee (NWC).

But delivering judgment in the suit, Nyako invalidated the indirect primary that produced Emenike as the party’s candidate.

She ordered the APC to forward Ogah’s name to INEC as the duly elected governorship candidate.

She also directed the electoral umpire to give recognition to the plaintiff.