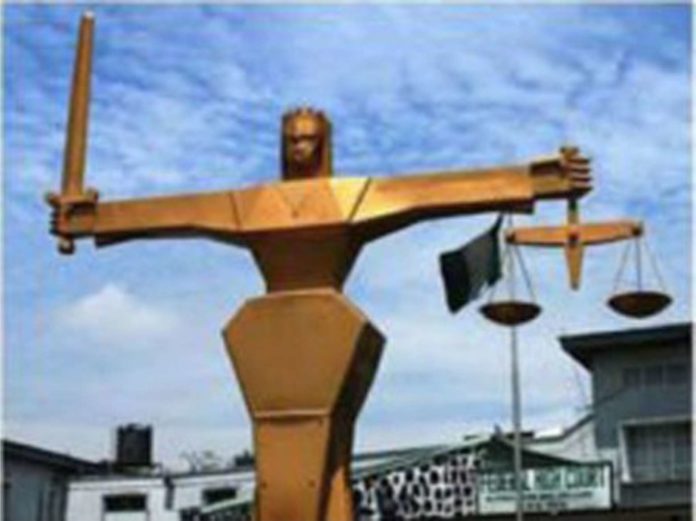 The Presiding Judge, Enugu Judicial division of the National Industrial Court, His Lordship, Hon. Justice Olukayode Arowosegbe has ordered the Nigerian Navy to pay one Kenechukwu Owoh the sum of One Million, Eight Hundred and Thirty-Two Thousand, Seven Hundred and Sixty-Seven Naira, Forty-four Kobo (N1,832,767.44) only as arrears of salary from October 2014 to September 2016 as final and full settlement in the matter brought against the agency.

The Court entered the judgment in accordance with the terms of settlement consented by both parties in substantial compliance with the rules of the court.

From facts, the claimant- Kenechukwu Owoh had filed a suit against the Nigerian Navy and sought a declaration that his purported trials and subsequent dismissal are illegal, unlawful, unconstitutional, and null and void.

Likewise, an order of immediate reinstatement, promotion and payment of all his entitlements from January 2014 to when he is recalled with the sum of N500,000,000.00 (Five Hundred Million Naira) for damages.

In defense, the Nigerian Navy joined the issue by filing the necessary processes and filed an application to dismiss the suit for lack of jurisdiction; and the matter proceeded to hearing.

However, in the course of hearing, the learned P. M. Okongwu Esq for the Nigerian navy intimated the Court of the desirability of amicable settlement and prayed the Court to so order, and the learned Arinze Onyia Esq of counsel to Mr. Kenechukwu agreed and the case was referred to Alternative Dispute Resolution Centre of the Court for Mediation and Conciliation with the imprimatur of the Court’s ADR officer Ogochukwu Chikelu.

Sequel to series of deliberations in the mediation session, an amicable settlement was reached by both parties that Kenechukwu is willing and has accepted the payment of the sum of One Million, Eight Hundred and Thirty-Two Thousand, Seven Hundred and Sixty-Seven Naira, Forty-four Kobo (N1,832,767.44) only as arrears of salary from October 2014 to September 2016 as final and full settlement of his claims against the agency in the matter and every other claim in the matter deemed to be forfeited.

Delivering the judgment, Justice Arowosegbe ruled on the terms of settlement as agreed by both parties and awarded no cost in the spirit of an amicable settlement.